The NYPD is helping the Secret Service ramp up security outside Trump Tower on Fifth Avenue this afternoon to levels befitting the president-elect, according to an NYPD spokesman. In addition to the row of Sanitation Department trucks parked end to end outside the tower since Tuesday, police have placed white concrete barriers emblazoned with the NYPD logo across 56th Street at the eastern intersection of Fifth Avenue.

"Security gets revved up," the NYPD spokesman said. As for the barriers, "They stop vehicles from ramming into the location and blowing it up with explosives."

Police "are in the process of putting up a blockade, I would say," said Isaac, 23, who works at the Merrill Lynch building across the street from Trump Tower and sent us pictures of the scene (he declined to provide his last name). Isaac's office windows face the tower, and he said he's accustomed to seeing Donald Trump pass in and out with a security detail—up to four times a day when he's in town. But the barriers, in addition to a white security tent, are new.

"It's much, much different this time," Isaac said. "It usually is just federal agents in suits, but now we have counterterrorism agents. They are not holding riffles, but sometimes they open the van and you can see them." He counted roughly 15 secret service agents, 10 to 12 counterterrorism agents, and "numerous" cops.

Isaac added that he could see protesters on the corner of 57th Street—as close as they're allowed to get to the tower. He and his coworkers have had to use the 55th Street entrance to their building.

"I'm sure all of the businesses around here are definitely being affected," he added. "I can't imagine what Gucci [inside Trump Tower] is going through."

He paused to look across the street. "I see associates in there," he said. "But I don't see anyone in there shopping."

Polo, Prada and many others closed on NY 5th Ave as massive security cordon thrown around #Trump tower - cops say businesses are pissed off pic.twitter.com/UK3XVZIHIA

Tonight's anti-Trump protest is planned to start at 6:00 p.m. at Union Square. The group will then march to Trump Tower at 8:00 p.m.

An NYPD spokesman wouldn't confirm if Trump is planning to exit Trump Tower this afternoon. "We don't comment on the movements of the president or president elect," he said. 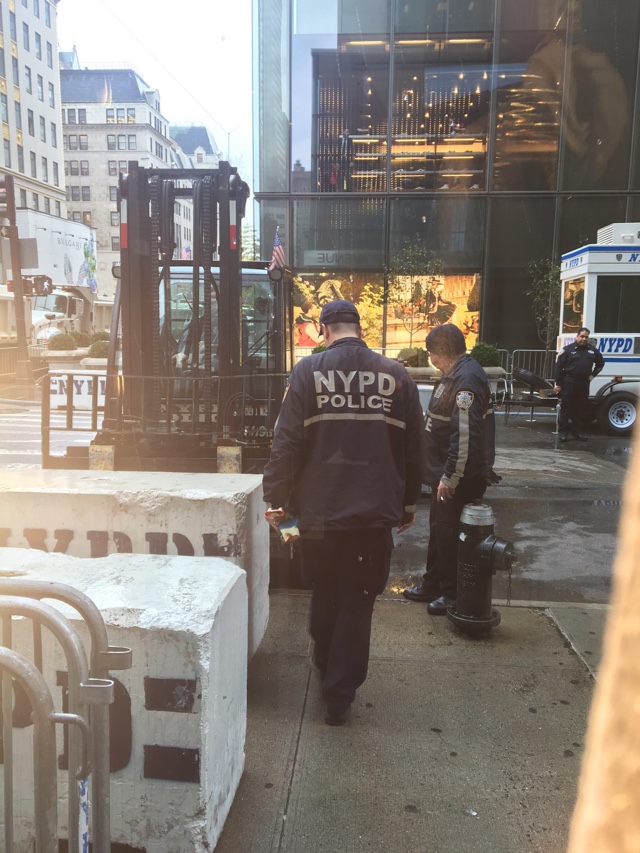 #barriers
#nypd
#president elect
#security
#Trump Tower
#original
Do you know the scoop? Comment below or Send us a Tip