Last night's presidential debate in St. Louis featured Donald Trump threatening to jail Hillary Clinton if he were elected president (it was just a joke, his campaign claimed this morning, though he seemed pretty serious and insistent) and bringing up Bill Clinton's accusers. CBS News éminence grise Bob Schieffer was suitably dismayed and spoke for many Americans when he wondered, "How have we come to this? This is supposed to be a campaign for the most powerful office of the land. Here we’re marching in women into the hall who supposed to have some relationship with one of the candidate’s spouses. What’s that supposed to prove? I mean this is what they do in Banana Republic. This is the United States of America." And guess what—it could have been worse!

Ahead of the debate, Trump held a press conference with Paula Jones, Kathleen Willey, and Juanita Broaddrick, all of whom have accused Bill Clinton of sexual misconduct, as well as Kathy Shelton, who was a 12-year-old rape victim when Hillary Clinton was appointed as her accuser's defense attorney (the candidate has said she tried to get out of the appointment).

But that apparently wasn't enough to Trump's team, which includes Breitbart CEO Steve Bannon, Clinton conspiracist David Bossie and son-in-law Jared Kushner (whose dad knows something about dirty tricks), because they actually wanted the women to shake Bill Clinton's hand before the debate. 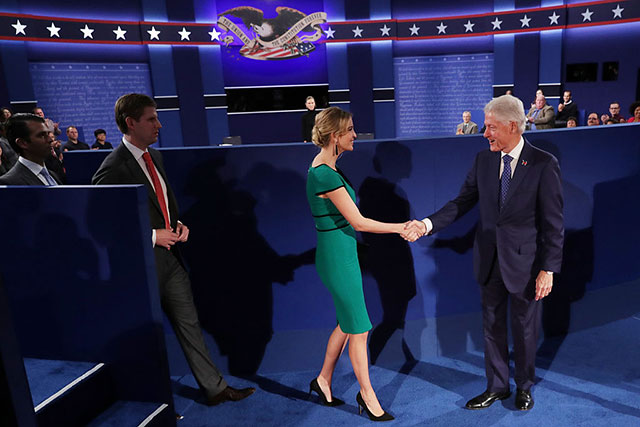 The idea was to have the women seated in the "Family VIP box" in the debate hall, taking the seats usually reserved for Trump's wife Melania and three oldest children, Donald Jr., Ivanka and Eric. From the Washington Post:

The campaign’s plan, which was closely held and unknown to several of Trump’s top aides, was thwarted just minutes before it could be executed when officials with the Commission on Presidential Debates intervened. The commission officials warned that, if the Trump campaign tried to seat the accusers in the elevated family box, security officers would remove the women, according to the people involved, who spoke on the condition of anonymity because the discussions were confidential.

The gambit to give Bill Clinton’s accusers prime seats was devised by Trump campaign chief executive Stephen K. Bannon and Jared Kushner, the candidate’s son-in-law, and approved personally by Trump. The four women — three of whom have alleged that Bill Clinton sexually assaulted or harassed them years ago — were to walk in the debate hall at the same time as the 42nd president and confront him in front of a national television audience...

Frank J. Fahrenkopf, the debate commission’s co-chairman and a former Republican National Committee chairman, caught wind of the plot on Sunday and immediately moved to put an end to it. Fahrenkopf tartly warned a Trump staffer that if the campaign tried to put the four women in the family box, security personnel would remove them, according to people with direct knowledge of the conversations...

That came shortly after commission officials told the Clinton campaign that they could not seat Sen. Claire McCaskill (D-Mo.) with Bill and Chelsea Clinton and her husband, Marc Mezvinsky, in the Clinton family box. The discussions continued up until the debate programming began.

Rudy Giuliani said the Trump campaign thought that the various sides could pick who sat where, since Fahrenkopf let billionaire and Trump hater Mark Cuban sit in the front row of the first debate, in spite of the Trump campaign's objections.

FYI, Kushner, who is a real estate developer and the publisher of the NY Observer, has reportedly been telling RNC chairman Reince Priebus to be more "loyal" to Trump because the tape where his father-in-law talks about kissing unsuspecting women and grabbing their genitals isn't such a big deal. Trump has vowed to burn any Republicans who cross him.

Schieffer said of this hell we're in, "I just hope to God I don’t see another campaign like this one. America can do better than what we have seen here tonight. This was just disgraceful."