The Philadelphia accountant suing a West Village bar for allegedly denying him service over his "Make America Great Again" hat is now arguing that he is a member of a "protected class," and likening his support for the MAGA creed to a religious belief.

Citing an "expansive definition of creed," an attorney for plaintiff Greg Piatek filed court papers last week claiming he was "adhering to his closely held spiritual beliefs by adorning the hat in question." Those spiritual beliefs "entirely transcend the political realm," the suit claims, and are supposedly loosely related to the 30-year-old tourist's sympathy for the victims of 9/11.

That sympathy, and his choice to express it through the president's preferred hat, qualifies Piatek as "a member of a protected class…[who] was discriminated against on account of his membership in that class." The suit references the court's previous recognition of non-traditional creeds, like the refusal of anti-vaccination parents to inoculate their children, as precedence for Piatek's claim.

"A religious belief can appear to every other member of the human race preposterous," the memo acknowledges, "yet still be entitled to protection."

In the initial suit, filed in Manhattan Supreme Court in March, Piatek alleges that he was snubbed and insulted for wearing the hat to The Happiest Hour in the West Village this past January. In his retelling, Piatek was called a "terrible person" by one bartender, and was eventually removed from the bar by a bouncer, at the manager's request.

He says that he called the police afterward, but was informed by two NYPD officers—described by the plaintiff as "sympathetic, accepting, and understanding"—that the matter was not criminal in nature. 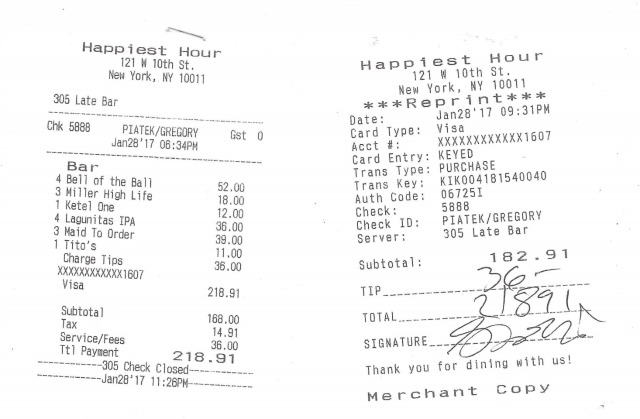 Copies of Piatek's receipt filed in a Manhattan Supreme Court

Meanwhile, the attorney for the West Village bar, Preston Ricardo, says that Piatek made the whole thing up. In August, the defense produced receipts showing that Piatek left a $36 tip on his $182 tab—evidence that would seem to conflict with the plaintiff's claim that it was "the most discriminatory, humiliating and 'Saddest Hour' of his life." In response, Piatek's attorney argued that he has "such a good heart that he’s going to tip no matter” how he is treated.

The defense is currently attempting to get the case tossed, prompting this most recent argument about religious-like persecution. (Piatek's representation did not respond to a request for comment).

"The plaintiff's vague and conclusory arguments are entirely fanciful," Ricardo told Gothamist. "They have no support in the law. And they continue to show that the action is nothing more than an ill-conceived publicity stunt guised as a lawsuit."

#greg piatek
#lawsuit
#maga
#make america great again
#suit
#the happiest hour
#trump
Do you know the scoop? Comment below or Send us a Tip