Donald Trump is having a little trouble getting people to come to his Softly Sensual Doomsday Hellmouth Inauguration Spectacular on Friday. Though one might assume folks would turn out in droves to watch 3 Doors Down serenade us into our new post-facts utopia, it appears Team Trump is expecting a much smaller turnout than Obama got in 2009, and now the President-elect is using targeted advertising on Facebook to PERSONALLY INVITE all of you to watch the Earth burn.

Marina Cockenberg of The Tonight Show first spotted Trump's despy inauguration ad last night, and did the hard work of clicking that little "Why Am I Seeing This Ad" button to find out why Team Trump had its eyes on her:

imagine being so disliked that 4 days before your inauguration you start paying to send desperate FB ad invites to "person, 27+" pic.twitter.com/UQ0m4D7vg4

Indeed, when I, also a New Yorker age 27+, checked my own Facebook, there was Trump, begging me to hang out with him. Sad! 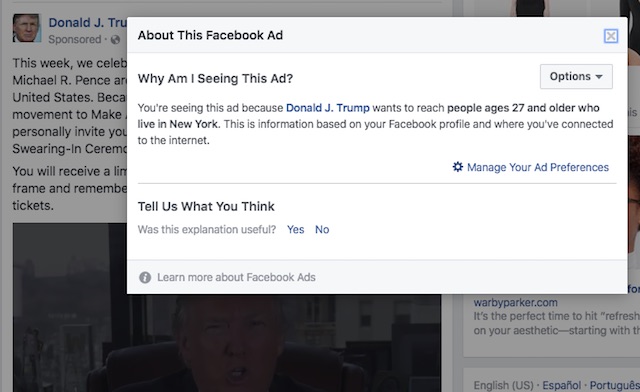 Though Trump has bragged about his inauguration's "unbelievable, perhaps record-setting turnout," officials are expecting about 800,000 to 900,000 people to hit the National Mall on Friday, as opposed to the 1.8 million people who attended Obama's inauguration in 2009. Trump will also only attend three inaugural balls—Bill Clinton went to 14 on his inauguration day, and the Obamas went to 10.

Meanwhile, scalpers say they're losing money on inauguration tickets—Yossi Rosenberg of Manhattan told the Daily News he bought a pair of tickets for $700 in hopes of selling them for $1400, and he can't seem to get them off his hands. He even advertised them on white supremacist websites like the Daily Stormer, but alas, Trump's old buddies seem to have abandoned him, and the tickets have remained unsold. "Nobody wants to buy them," Rosenberg told the News. "It looks like I'm stuck with them, I might even have to go."

At least he'll get to see a couple of Rockettes?

#donald trump
#election 2016
#facebook
#inauguration
#inauguration 2017
Do you know the scoop? Comment below or Send us a Tip