Trump Models Is Closing Down As Staffers And Models Flee

The Trump Organization is pulling the plug on Trump Models, the modeling agency that raised eyebrows over reported immigration law indiscretions.

Corinne Nicolas, president of the agency, told industry colleagues about the upcoming closure in an email over the weekend, Mother Jones reported. A Trump Organization spokeswoman confirmed the plan to Gothamist, writing in an email, "On the heels of the recent sale of the Miss Universe Organization, the Trump Organization is choosing to exit the modeling industry. While we enjoyed many years of success, we are focused on our core businesses in the real estate and golf industries and the rapid expansion of our hospitality division."

The Trump Organization sold the Miss Universe Organization, which runs the international beauty pageant as well as Miss USA, in September 2015 as some of then-candidate Trump's business partners had cut ties with him over his inflammatory rhetoric about immigrants. The following year, recordings surfaced in which Trump boasted about walking in on beauty pageant contestants as they changed in dressing rooms, and 1997 Miss Teen USA contestants said they recalled him doing the same in dressing rooms with girls as young as 15.

Similar allegations arose during Trump's time in the modeling business. During a short-lived partnership in the early '90s with a company called American Dream Calendar Girls, a pageant-to-pinup-calendar business, Trump allegedly groped the company's cofounder under a restaurant table, then later in the night forcibly kissed and groped her in the Mar-a-Lago estate bedroom of his daughter Ivanka, then 11. Another woman, a model contestant in the pageant, accused Trump of appearing uninvited in her bed that same night. Trump denied the allegations, and the American Dream cofounder, Jill Harth, withdrew the lawsuit outlining them as a condition of settling a separate lawsuit about money he owed. 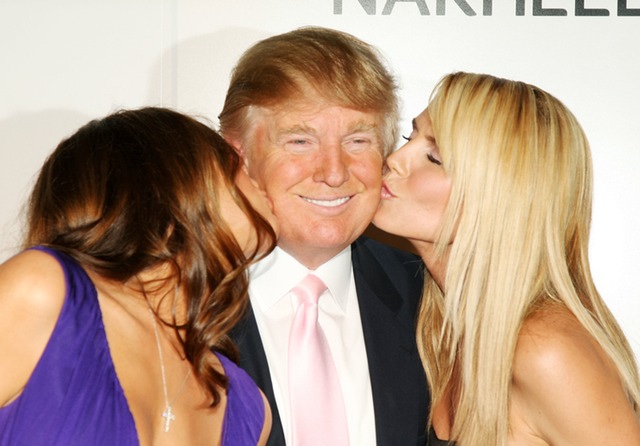 Trump founded Trump Models in 1998, pledging that it would be "the richest agency." Mother Jones reported in 2016 that the company has used foreign models who came to the U.S. on tourist visas, which do not permit people to work in the country. Trump's third wife Melania, a former model who came to the U.S. from Slovenia in the mid-'90s, has faced questions over whether she worked illegally while in New York on a tourist visa. She denies it.

Mother Jones has also reported that models and staffers have been fleeing Trump Models since the election, not wanting to be associated with Trump's policies.

In a pre-election Instagram post, model Maggie Rizer announced that she had cut ties with the agency, writing, "I cannot wake up Wednesday morning being the least bit related to the Trump brand; win or lose. I owe it to myself and to my children to proudly stand up for what I believe in and that is a world where Donald Trump has no voice for the future of our country."

Today I had to do a hard thing parting ways with my agent at Trump Models. Corinne is a great agent and a close friend who has guided and supported me as I transitioned to becoming a working mom. That said, as a woman, a mother, an American and a human being, I cannot wake up Wednesday morning being the least bit related to the Trump brand; win or lose. I owe it to myself and to my children to proudly stand up for what I believe in and that is a world where Donald Trump has no voice for the future of our country. 🇺🇸🇺🇸🇺🇸🇺🇸🇺🇸🇺🇸🇺🇸🇺🇸🇺🇸🇺🇸🇺🇸🇺🇸 #RockTheVote #GodBlessTheUSA #ImWithHer

Trump's failed ban on refugees entering the country would have kept his employee, model Ataui Deng, from coming as a Sudanese refugee at age 12 in 2004.

#conflict of interest
#donald trump
#failing up
#rape culture
#sexual assault
#sexual harassment
#trump models
#trump organization
Do you know the scoop? Comment below or Send us a Tip