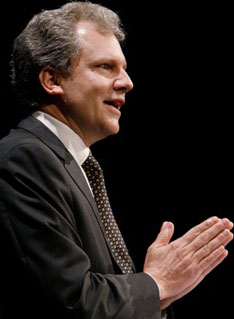 The New York Supreme Court has ruled that Times publisher Arthur Sulzberger Jr. must submit to a deposition by attorneys representing Donald Trump, who is suing Times business editor Timothy O'Brien and the publishers of O'Brien's book TrumpNation: The Art of Being The Donald.Trump is seeking $5 billion in damages because he says the book grossly underestimated his net worth at $150 million to $250 million, instead of the billions and billions he claims. According to the Philadelphia Inquirer, Trump contends that being labeled a mere millionaire hurt his "brand and reputation" and undermined the "perception of Trump as a businessman of extraordinary means and ability (which he is)."

Trump isn't suing Sulzberger or the Times, but his lawyers want to question Sulzberger about an e-mail exchange with O'Brien, during which he praised the book after reading it "while trekking to Machu Picchu in Peru." O'Brien reportedly replied that "Donald is easy to lampoon, but harder to portray accurately (and deep down inside he's really sort of likable - in the way that endearing but out-of-control 8-year-olds are likable)." O'Brien also predicted that Trump would "go ballistic," but bragged that Trump "did see the cover art about six months ago and called to tell me: 'I loooovvve this. I look like some kind of superhero. Like a Marvel superhero.'"

A source close to Trump tells Page Six that an added bonus of all this is that "the e-mails will embarrass both men. O'Brien ridicules Sulzberger. O'Brien sends him a copy of his book anonymously and Sulzberger gets in touch and says, 'Hey I got your book . . . and I read it!' And O'Brien goes, 'Whoa! I can't believe you got it. You're a genius! How did you get it?' He thinks Sulzberger is a dummy." But the bigger question left unanswered by the court is whether Sulzberger will be allowed to bring his toy moose along to the deposition.