Trump Does Not Seem To Understand The Whole 'Presidency' Thing

A long time ago, in a hopeful political era that seems far, far away, Hillary Clinton hinted Donald Trump wasn't as qualified to be President of the United States as she was. "I prepared for this debate," she said at the first debate at Hofstra in September. "And you know what else I prepared for? I prepared to be President." 20 years have since passed and we're saddled with a President-elect Trump—and it seems Clinton might have been right about that whole him-not-being-prepared bit.

Indeed, some information has spilled out about our future Fascist-in-Chief's plans for the presidency come January, and though he has managed to stick a white supremacist in the White House, he has not, apparently, even thought to assemble a staff. In fact, according to the Wall Street Journal, Trump's team wasn't aware they weren't just going to inherit Obama's White House staffers and would have to hire their own.

A source tells Deadspin that Trump's team isn't even all that sure of what a president does, other than Making America Great Again by furiously tweeting. Advisors with the Obama administration who met with Trump's transition team told the site the Trumpkins had no policy papers or concrete plan on hand.

“They are blatantly unprepared and don’t really have any sort of plan at all so far,” the source told Deadspin. “The best illustration is there were no prepared policy statements or papers. Whereas in 2012 Romney’s team had hundreds of pages worth of federal policy transitions planned and written out, Trump’s team had (as of Wednesday) literally no pages."

Worse: "Also his team’s grasp of federal powers is fairly paltry. They had hours long meetings with outside advisors to figure out what could and couldn’t be delegated to Pence, what the president could do unilaterally, etc.," the advisor said. Indeed, according to the Journal, Trump "seemed surprised by the scope" of "the duties of running the country," and Obama has agreed to help hold his hand through it for a bit, even though Trump's repeatedly called him "unfit to serve," "a disaster," and "the worst president, maybe in the history of our country." These criticisms seem harsh, but it's cool: that was before Trump found out that being president is hard.

It seems slightly disconcerting that the future leader of the free world hasn't studied up on the job description—or that he seems to want to do the job part-time—but worry not, Americans, for Trump is turning to you for help. His team has set up this very sleek transition website where you can "share your ideas" on how to "Make America Great," though it's unclear if they'll accept my suggestion that we do so by un-electing Trump: 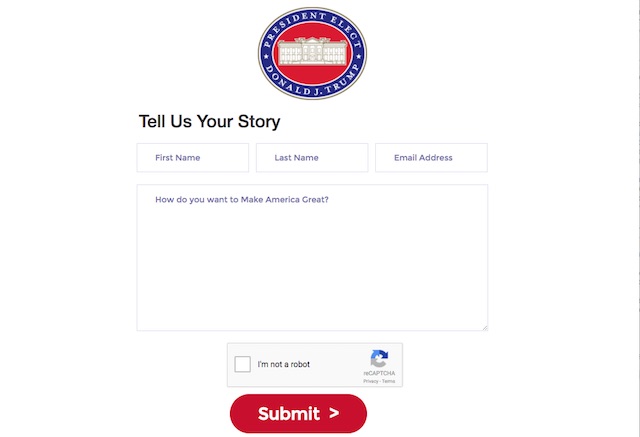 Another fun thing you can do on Trump's fancy website is apply for an appointment with the administration, since he has to fill about 3,000 of those over the next two months. The "Serve America" section of the site, which appears to have been written by a Trump Facebook commenter, offers the following: 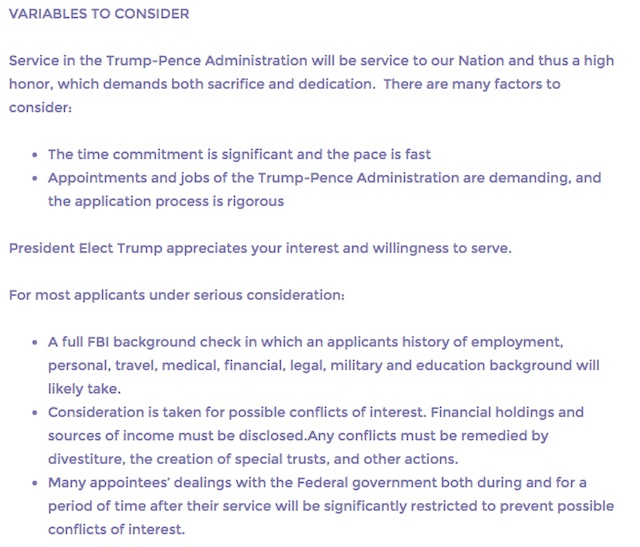 Parties interested in keeping our democracy from imploding/being a part of the implosion can apply online, but note the application process might be rigorous. The administration should be as picky choosing its staff as this country was in choosing its leader, after all.

#being president is hard
#donald trump
#election 2016
#really?!?
#what like it's hard?
Do you know the scoop? Comment below or Send us a Tip