On Wednesday, 33-year-old James Gregg was riding his bicycle down 6th Avenue in Park Slope when he was struck and killed by the driver of an 18-wheeler, in an area where trucks are not permitted. Today, the NYPD confirmed that the 47-year-old driver of the truck has been issued five summonses: for driving a truck off of a designated local route; for the size of his vehicle; for operating a commercial motor vehicle without proof of periodic inspection; for a violation regarding tire tread depth measurements; and for required maintenance on the truck's anti-lock braking system.

The driver was not arrested and there is no criminality suspected, according to an NYPD spokesperson.

Marco Conner, who is the legislative and legal director at Transportation Alternatives, told us that he was struck by the lack of any summonses "for essentially the act of causing the bicyclist's death...Even though the NYPD says that there is no criminality suspected, they could still and should charge the driver at the very least with a violation of due care." That violation would be punishable by a fine of $500 or up to 15 days' imprisonment, according to New York state law.

When the NYPD first released information from its Collision Investigation Squad on Wednesday afternoon, it said that Gregg was biking alongside the truck and collided into its rear wheels. Yesterday, police floated another theory: that the truck created a "wind force" that sucked the bicycle underneath, which an NYPD spokesperson said is "normally what happens" in these cases.

That latter explanation was quickly derided by street safety advocates who pointed out that the truck would probably have had to be traveling at highway speeds to generate that sort of wind force. Conner argued that "if we are to give any credence to the police department's account of wind force having been a factor, then they should reasonably deduce that the truck driver was driving at an excessive speed."

Today, an NYPD spokesperson said that according to a CIS detective, "it appears that the bicyclist was attempting to pass the commercial vehicle in between the vehicle and parked cars, which was a narrow passage. He's observed by a witness putting his left hand onto the side of the truck. The bicycle apparently goes to the right, and he goes down to the left, and is then struck by the rear tires."

The spokesperson said that the investigation is ongoing, but that "based on my conversation with the detective, it doesn't appear likely that there'll be a change."

Steve Vaccaro, an attorney for victims of traffic violence and a safe streets advocate, said that this latest explanation from the NYPD, like those that have preceded it, shifts the blame away from the driver and onto Gregg. And as for the police's report that Gregg was skitching, Vaccaro said that as far as he'd heard, that observation was attributed to an elementary school student at the scene—and as many have pointed out, it's far more likely that Gregg was attempting to push himself away from the vehicle than trying to hitch a ride.

"All too often in the crashes that I have looked at, there is very much a rush to judgment to say, 'The cyclist did something wrong or the pedestrian did something wrong and this was the cause,' and not to look any further," Vaccaro said. "I have not seen the NYPD come out with a public announcement to the effect that this truck driver never should have been there. Why has that escaped them in their public statements? Don't they understand that is absolutely devastating to Mr. Gregg's survivors?"

When we asked the Department of Transportation whether they had any plan to address trucks driving off-route, a spokesperson referred enforcement matters to the NYPD and said that "this is not a truck route and there is signage in the area alerting motorists as such." As of Wednesday, the NYPD's 78th precinct had not issued any tickets for truck route violations in that area, but yesterday and today, several residents noticed police pulling over trucks on 6th Avenue. 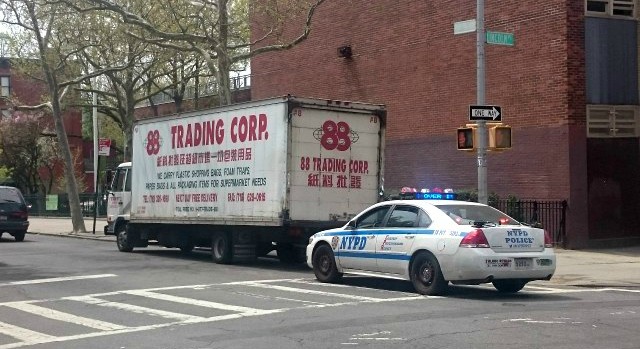 "I only hope that this zealous enforcement of the truck routes continues for more than a week or so and extends to non-truck roads on which a cyclist hasn't been recently killed," said Ted, a Park Slope resident who lives a block from the site of Wednesday's incident and sent us the photo above.

After the fatal crash, some Park Slope residents set out candles and flowers in a small memorial at the corner of 6th Avenue and Sterling Place. There will be a visitation for Gregg on Saturday, at Piro Funeral Home at 251 DeKalb Avenue, from 3 p.m. to 6 p.m.