Lawsuits from community and environmental groups, a tanking economy, and outcry over slavery money aren’t stopping Forest City Ratner from pushing forward with the $950 million Barclays Arena in Brooklyn, possible future home of the New Jersey Nets. Yesterday a luxury suite showroom opened in the New York Times building as an attempt to woo big-ticket investors and shift public opinion.

Renderings for the proposed project have gone through multiple revisions, and if this 22-acre, mixed-use development ever comes to pass, it’s unlikely to look much like the initial plans. But one suspects the luxury suite depicted in the above rendering will likely turn out exactly as imagined. Call it the banality of Barclays: of the five sports fans depicted above, only one is actually paying any attention to the game – and of course he’s watching it on television. The other two in the foreground can be overheard saying, “Dude, it’s just as well the rest of Ratner’s project didn’t get built, because finding parking is a snap!” 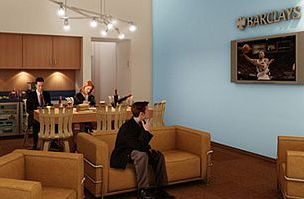 Suites like the one above would rent for somewhere in the $300,000 range; but that’s peanuts compared to the really luxuriant luxury suites (pictured left) under the stands, which don’t have a view of the court. That’s because they come with 12 courtside seats – for a cost of $540,000. There are 11 of those elite suites left after Jay Z – an investor in the Nets – claimed one.

Ground-breaking on the arena is still TBD, pending the lawsuits and the ability of Goldman Sachs to secure financing. But 20% of the suites have already been rented, Brett Yormark, president of Nets Sports and Entertainment, tells the Times. And earlier this week the Nets announced $100 million in sponsorship deals to help the move to Brooklyn. Digital signs inside and outside the building will be synchronized to show the sponsors’ ads as visitors enter; those include Anheuser-Busch, Izod and Foxwoods Resort Casino, among others.