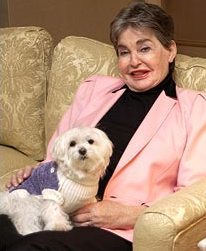 Being heir to $12 million can be a real dog. Especially if you're Trouble Helmsley, the cherished Maltese owned by the late real estate developer Leona Helmsley. "Queen of Mean" Helmsley shocked people from the grave by leaving $12 million to the pooch, which was more than what her grandchildren (combined) inherited.

Helmsley's friend John Codey, who oversees Helmsley's trust, reveals that there have been many death threats: "We received any number of threats to kidnap the dog...'I'm gonna kill the dog.' he 'I'm gonna kidnap the dog. I need the $ 12 million.'" (Trouble might be a real handful for any potential kidnappers - she's apparently nasty!) Codey also said that there's a "rotating security team" for Trouble, who also uses the alias "Bauble" when traveling.

And we don't think WCBS 2 reporter Kate Sullivan was joking when she said this, but it does seem like something out of The Onion: "Trouble is scheduled to return to New York City in January for a news conference involving her charitable trust. Her staff says she will, of course, take a private plane to New York, and she will have a tight security team."