Troopergate: Now With the IRS! 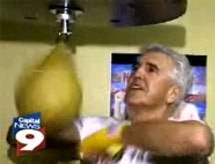 Yeah, it was too much to hope that the two of the most powerful men in Albany could put aside their differences and, uh, govern. Now, Governor Spitzer's aides are suggesting that State Senate Majority Leader Joseph Bruno should pay income taxes on his many flights on state aircraft.

The Republicans got a hold of a letter drafted by State Senate Minority Leader Malcolm Smith's aides that asked the IRS to look into the matter. The Post got a hold of the letter yesterday, which then gave Bruno another opportunity to accuse Spizer et al. of dirty tricks. Smith himself said he was asked by Spitzer to go after Bruno but, "I want to be clear. We - my staff and I - decided not to pursue this matter after concluding it would be a distraction from us getting back to the people's business."

Bruno called Smith a "totally owned subsidiary of Spitzer" and a "wimp." And we just watched this video of Bruno, former heavyweight champ back in 1954 in Korea (!), jabbing at a speed bag, and he's got some guns for an old man! He told Capital News 9, "You know what, it's a little cleaner and neater in the ring when you're fighting with rules. And that's kind of what we need more of in government are some rules so that people act honestly and in a forthright way and in an open and transparent way."

Oh, and guess how the Republicans got a hold of the letter: As the Sun explains it, "A draft of the letter to the IRS, which was signed by three Democratic state senators, was mistakenly e-mailed to the wrong recipient, landing in the hands of Senate Republicans and the New York Post." Whoever emailed it is in so much hot water.