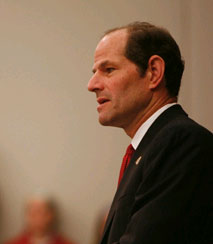 Darren Dopp, Governor Spitzer's communications director who was suspended after it was discovered he and other aides were plotting against a Spitzer rival (the State Senate majority leader), may be leaving state government for the warmer shores of...political lobbying. Dopp allegedly accepted a job at Patricia Lynch Associates, which was formed at a former aide of Assembly Speaker Sheldon Silver, according to its website, occupies "the number two spot among all lobbying firms in New York State."

Dopp will not be lobbying but opening up the public relations arm. Dopp's lawyer Terrence Kindlon told the Daily News, "This has been a terrible ordeal, and Darren thought the best thing for him and his family was to leave government service." The News notes that the new gig probably pays from than the $175,000 he was pulling down the state.

The Post thinks the move may be "embarrassing" for Spitzer, since Spitzer denounced officials who become lobbyists. Still, you have to wonder if Spitzer rather clean house than deal with a disgraced aide. As it happens, Dopp still plans to testify in front of the Public Integrity Commission about the matter.

And wouldn't you know it - some State Senate Republicans would like to stop focusing on Troopergate.