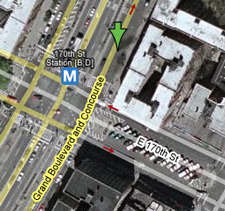 Police responded to reports of gunfire in an apartment in the Mt. Eden section of the Bronx last night and found three people shot in the head. Two of the victims were dead and one was rushed to Lincoln Hospital, where he is in critical condition. The dead victims were 20-year-old Ludmildy Rosado and 34-year-old Daniel Newton. Police were not sure if the two knew each other or not.

Neighbors who live in the building on the Grand Concourse where the shooting occurred just after midnight said that they heard shouting, tussling, and screams for police before the gunfire erupted. The gunman left the scene and police are searching for him, using his street name or alias. It's unclear whether the name was overheard or someone identified him.

Five pit bulls were removed from the apartment where the shooting occurred, including two puppies. Relatives of the victims were soon on the scene and at least one collapsed on the street outside of the building at 1410 Grand Concourse. One resident described the neighborhood as a bad one, with drugs, prostitution, and crime as a constant on the streets. A woman who lived in the building said that she planned on moving out, citing fears for her children's safety.