Triple Shooting in The Bronx Kills One 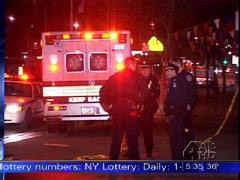 It was a violent night in the Longwood section of The Bronx this morning, where a triple shooting left two people injured and killed one. Police say that all three victims were shot while inside vehicles. One victim, who was shot in the arm, actually walked into the 40th precinct to report the shootings.

The 28-year-old victim who was shot in the arm and head was taken to Lincoln Hospital and is in critical condition. The victim who was fatally shot was found dead inside her car. It's believed that the suspect was also in a vehicle, but police urge anyone with more information to contact them.

#bronx
#crime
#lincoln hospital
#the bronx
Do you know the scoop? Comment below or Send us a Tip
A new Gothamist is coming! We’ve moved comments over to our beta site. Click here to join the conversation and get a preview of our new website.