Three men are in the hospital after a gunmen fired upon them—as well as police— in a Brooklyn neighborhood yesterday afternoon. One resident said, "I heard six [shots] - the first initial, and the four, the last - it was like, bang, bang, bang, bang, and that was it - everybody ran." 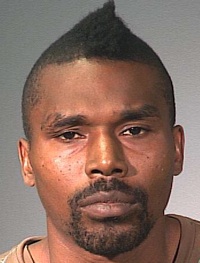 According to the NYPD, the shooting occurred at 3:24 p.m. in the Prospect-Lefferts Gardens neighborhood. The suspect, identified as Kevon Brown, 30, allegedly fired, hitting two men—a 25-year-old was struck in the torso while a 42-year-old was hit in the torso and leg—in front of 33 Lenox Road. Two police officers nearby approached the suspect, who fired at them as he fled. The cops, who were not hit, did not return fire.

While fleeing, the shooter then threatened a 24-year-old man in front of 50 Lenox Road. Police say that Brown "struggled with him before discharging his firearm, grazing the victim in the neck, before again fleeing the scene." All victims were taken to Kings County Hospital.

It's suspected it was a gun battle between two parties. Another resident told PIX 11 that she was running with her one-year-old son in her arms when she heard the gunfire: "Jean’s father is a pastor who was wrapping up Sunday services on the block when the shots were flying. Now, she doesn’t want to raise her son here. The sight of one of the victims on the ground will stay with her."

Community activist Tony Herbert said, "I’d say I want to commend the Police Department, because they exercised great restraint without firing back. That means it minimized anybody else being hit. So again, they need to be commended. We ridicule them when they go out and shoot their guns off. Today, they were professional and did their job.”

Police are seeking Brown's whereabouts. He is described as 5'10" tall, weighing 185 lbs., with brown eyes and black hair, and wearing a white t-shirt and multi-colored shorts. Anyone with information in regards to this assault is asked to call the NYPD's Crime Stoppers Hotline at 800-577-TIPS. The public can also submit their tips by logging onto the Crime Stoppers Website at WWW.NYPDCRIMESTOPPERS.COM or texting their tips to 274637(CRIMES) then enter TIP577.