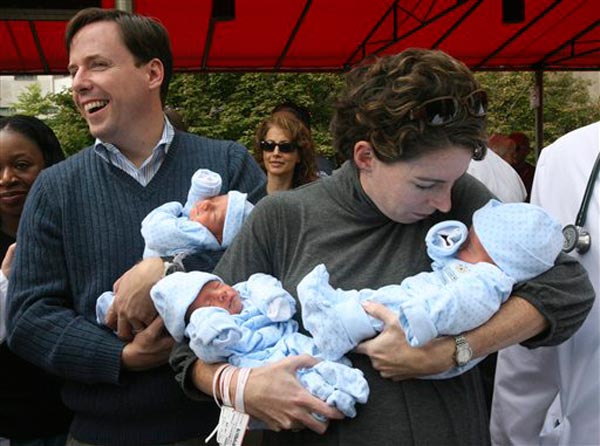 Doctors say that the chances of a woman having identical triplets without the help of fertility treatments range from 1-in-a- million to 1-in-200 million. Which is why Kevin Patrick, Declan Gerard and Cormac Francis are very special: The three bouncing baby boys were born at New York-Presbyeterian/Weill Cornell Medical Center last Friday to proud parents Kerry and Desmond Lyons. The babies--originally formed from a single egg that split twice and who shared a placenta-- ranged in weight from 5 pounds, 2 ounces to 6 pounds.

Yesterday morning, the Lyonses--who also have 3-year-old son Liam and 2-year-old daughter Ciara-- were on The Early Show, where they debated ways to telling the babies apart (Kerry suggested nail polish, Desmond tattoos). Kerry said, "We just feel lucky and blessed that we have these three amazing little babies, and they're healthy and, frankly, kinda cute, to boot, which we weren't expecting!"

The Daily News, which also has a cute picture of the triplets in the car, reported that a "team of about 15 doctors and nurses helped deliver the triplets." As the couple and the new babies left the hospital, Kerry Lyons said this was God's way of telling her not to be a Type-A personality anymore. She also asked the hospital staff, which was sending them off to their home in Sleepy Hollow, "Any of you guys want to come and help?"

#babies
#identical triplets
#New York Presbyterian-Weill Cornell
#triplets
Do you know the scoop? Comment below or Send us a Tip