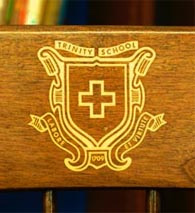 The Trinity School, a private school on the Upper West Side that charges annual tuition of $30,000 a year, is prepared to cash in on the rise in property values by opting out of the Mitchell-Lama housing program. That program was designed to reserve housing for middle-class tenants in New York through government subsidized loans and tax breaks. The disparity in below-market rents required by Mitchell-Lama and the value of the building that houses the school, with apartments above it, has apparently become too great for Trinity's administration to not take advantage of.

A planned sale to Pembroke Properties, Inc. will eventually result in the conversion of Trinity House (as the residential portion of the building is known) into luxury condos. Most of the current tenants, which include teachers at the school itself, would have to move out because the market rates of those properties would be out of their league.

Ms. Fenster has lived in the building, known as Trinity House, for 30 years. “The whole idea for Mitchell-Lama was to enable middle-class and working-class people to stay in Manhattan, which was a wonderful thing,” Ms. Fenster, 65, said yesterday. “But no one cares anymore. Everything is about making money these days.”

While the Trinity School is a private institution, the move to cash in on its property comes in stark contrast with a recent initiative by the state teachers' union, which is experimenting with using pension funds to construct subsidized housing for educators in the Bronx.

The Trinity School was founded in 1709 and is one of the oldest continuing educational institutions in New York. Its motto is "Labor and Virtue."

#bronx
#condo
#government
#house
#housing
#labor
#manhattan
#mitchelllama
#money
#new york
#news
#people
#private school
#profit
#sale
#school
#subsidized
#trinity
#Upper West
#Upper West Side
#west side
Do you know the scoop? Comment below or Send us a Tip
A new Gothamist is coming! We’ve moved comments over to our beta site. Click here to join the conversation and get a preview of our new website.