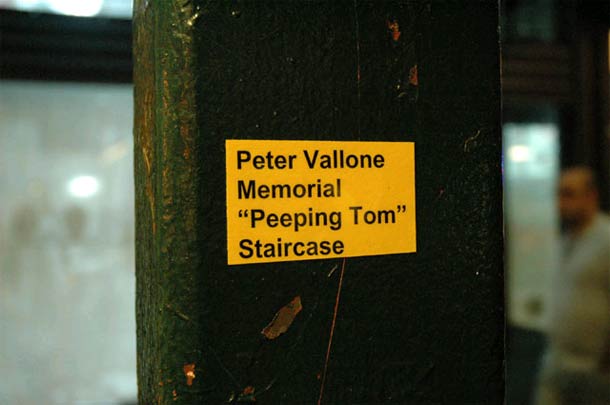 aboutmattlaw took this great photograph at the Ditmars Boulevard subway station stairs. It's a nod to Queens City Councilman Peter Vallone's proposed legislation to ban "non-sensual" peeping, with punishments like 90 days in jail and a $500 fine for first offense. Vallone said that his bill was prompted by some women's complaints that a "rather large pervert" was lurking under the Ditmars station's subway steps. Per the Queens Gazette, Vallone emphasizes, "These perverts use their eyes to invade the privacy of people's bodies, leaving many feeling violated. Yet, up until now, there has been a peephole loophole that gives anyone a license to gawk, leer and spy anywhere they please."

The NYCLU is against the bill, and executive director Donna Lieberman said it's written too looely, "This lack of clarity confers a license for abuse on those empowered to enforce the law by leaving it up to the individual police officer to decide which kinds of viewing are lawful and which kinds are degrading and hence unlawful." But some female Queens residents told the Queens Chronicle even though they're skeptical of the bill's effectiveness, they do like the idea of anything that can stop unwanted stares (though one woman did say, "Fortunately, I don’t wear skirts.”).

Earlier this week, the NY Times had an editorial about the bill:

The councilman says he has crafted this legislation narrowly, but if voyeurism ever really becomes illegal, it’s time to build more jails in New York City.

For better or sometimes worse, New York is a city of exhibitionists. One of the many reasons people come to New York is to show off...

New York is also a city full of spectators. There are probably many more New Yorkers who own binoculars than there are New Yorkers who love birds or opera. And why are the sales of telescopes over the moon in a place where, on most nights, it’s impossible to make out the big dipper? And, the newest, fanciest most expensive apartment buildings are made of the newest, fanciest and most expensive glass.

So true: If this law passes, we wonder if a law requiring certain kinds of blinds and curtains will go into effect.