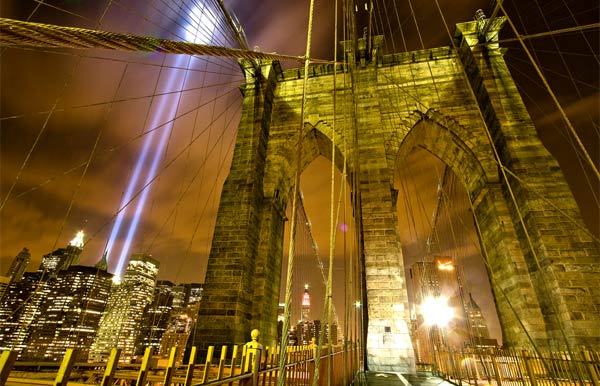 From yesterday evening to dawn this morning, the ethereal September 11-light installation Tribute in Light beamed into the skies from its downtown perch. Designed by artists Julian LaVerdiere and Paul Myoda, architects John Bennett and Gustavo Bonevardi of PROUN Space Studio, architect Richard Nash Gould, and lighting designer Paul Marantz and produced by the Municipal Art Society and Creative Time, the lights were first seen in March 2002 for a month and then became part of the September 11 anniversary fabric, shining from dusk till dawn.

CityRoom reveals that the Lower Manhattan Development Corporation gave money for the installation to run between 2004 and 2008. While there is talk of extending it for another year, MAS vice president Frank Sanchis said, “As we draw to the end of our agreement, I hope New Yorkers realize that unless somebody does something, the ‘Tribute in Light’ is going to end. It’s going to take more than public sentiment. It will take some agency figuring out how to sustain them and where they can go.”

The MAS has been talking to the WTC memorial group, the National September 11 Memorial and Museum, about a permanent location for the tribute as well. While one never knows with city agencies, we're confident that the Tribute of Light will not be going anywhere any time soon - it's a beautiful, elegant way to remember September 11. Here's hoping that a downtown corporation or group of companies can step up to keep it going - for instance, see who helped donate to the March 2002 showing.

Here's a 2002 Slate article by Gustavo Bonevardi, one of the designers, about the project and how it was too early for a memorial. There was a PBS/Thirteen New York Voices program about the project, Tribute. And the criticism about the installation that we can recall has to do with birds get confused by the lights and downtown residents being annoyed by the lights (more an issue when the lights were displayed for a month in 2002). And the Spike Lee film, The 25th Hour, features the Tribute in Light during its opening.