Trial Ends For Officer Involved In Eric Garner's Death, The Wait For A Decision Begins

The administrative trial of NYPD Officer Daniel Pantaleo in the 2014 killing of Eric Garner on Staten Island concluded on Thursday afternoon, but Pantaleo’s fate remains unresolved.

The seventh and final day of the trial began with lawyers for the CCRB, who are acting as prosecutors in Pantaleo’s case, calling a rebuttal witness to counter the testimony of a medical expert called yesterday by Pantaleo’s lawyers. That witness, Dr. Michael Graham, the Chief Medical Examiner of the City of Saint Louis, had testified that based on his reading of the autopsy report, there was no evidence that he was experiencing an acute asthma attack at the time of his death. Graham also testified at length that Garner definitely did not die of asphyxiation caused by compression of the blood vessels in Garner’s neck.

The CCRB’s rebuttal witness, Dr. Jason Graham, the First Deputy City Medical Examiner for the City of New York, pointed to abundant evidence in the autopsy report supporting its conclusion that Garner did have an acute asthma attack near the time of his death. A microscopic examination of Garner’s lungs showed eosinophilic degranulation, he testified, a cellular phenomenon that “occurs in the acute phase of an asthma attack.”

As to the question of asphyxia, it’s a red herring, the rebuttal witness testified: Asphyxia isn’t listed as a cause of death in the autopsy report. “It is not the position of this office nor has it ever been that compression of the blood vessels in the neck of Mr. Garner produced asphyxia that caused his death,” Dr. Jason Graham said.

The St. Louis Medical Examiner had testified yesterday that Garner’s continued ability to speak during his arrest, evidenced by his repeated complaint, “I can’t breathe,” argued against any restriction of his airway during his arrest. “I don’t see anywhere in here that was unable to move air,” he testified, after watching the video of Garner’s arrest.

The CCRB’s Dr. Graham disagreed, pointing out a substantial period during the physical struggle when Garner makes no noise at all. “There was enough compression of his neck during that period of time that he was unable to vocalize,” he testified Thursday.

After the testimony of this final witness, the two sides turned to concluding arguments. Stu London, Pantaleo’s lawyer, went first, arguing for over 47 minutes that many people might be responsible for Garner’s death, but Pantaleo, a well-regarded anti-crime cop who was just following orders, isn’t one of them.

It was Garner’s own refusal to submit to arrest that was responsible for his death. “His final words to Officer Pantaleo, ‘This stops today, it's done,’ unfortunately caused his own demise.”

Picking out an alleged chokehold as the single precipitating cause of Garner’s death, among all of the contributing factors of his underlying health conditions listed in the autopsy report, makes no sense, London argued. “This was a unhealthy, obese individual on a sweaty hot day, where his heart is twice the size of a regular heart, beating as hard as it could, confronted by a stressful situation, has an adrenaline surge, and all his frailties come to the surface.” Garner “had no margin of safety,” London said. “Any exertion he exhibited could be fatal.”

Deputy Commissioner Rosemarie Maldonado did not allow much evidence on the medical care Garner received after he became unconscious and an ambulance arrived, but London blamed the Emergency Medical Technicians who treated him. “They did an unbelievably poor job,” he said.

Pantaleo wasn’t on Bay Street that day because he wanted to hurt or harass Garner, London said, but because he had been ordered to be there by superior officers responding to the concerns of store owners irritated by the sale of untaxed cigarettes on the block. “It may be minor, the fact that it was untaxed cigarettes,” London said, “but it was important to those particular store owners.”

London responded to the testimony of prosecution witness Inspector Richard Dee, a veteran of NYPD gang squads who later came to be in charge of recruit training at the NYPD police academy. Dee had questioned Pantaleo’s decision to jump Garner rather than wait longer to resolve the situation peaceably, or since, there was back-up already on the way, to wait for greater numbers to more safely effect an arrest.

“You can’t second guess cops who basically have their feet on the ground, who are taking action,” London said. Dithering when making an arrest encourages the arrestee, he said. “The longer you wait the more you embold the individual.” 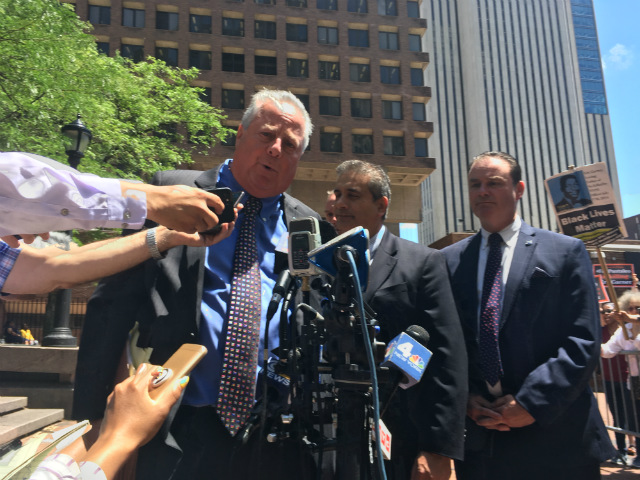 Significantly, London also read aloud portions of Pantaleo’s 2014 testimony to Internal Affairs investigators, which was submitted in lieu of testifying in this proceeding. Because of the secrecy imposed by current interpretations of New York Civil Rights Law Section 50-a, the public cannot see that transcript, but by reading parts of it aloud in his summation, London put fragments of it in the public record.

“What was your intent?” when putting your arms around Garner, an Internal Affairs questioner asked Pantaleo in his 2014 interview. “Just trying to bring him down to the ground,” Pantaleo answered. “I was on Mr. Garner’s back when he lifted himself onto all fours…. I was able to push him forward to now where I ended up with my feet up in the air behind me and only one arm around his upper area, I believe close to his throat, but his throat area was in the crook of my elbow…. There was no pressure to the neck.”

“Officer Pantaleo is not a scapegoat, London concluded. “He’s just a good anti-crime cop who on that day was attempting to do his job.”

Suzanne O’Hare, one of the CCRB lawyers prosecuting Pantaleo, followed London with a detailed, point-by-point concluding argument that stretched more than an hour and a half.

Pantaleo is facing departmental charges related to using a chokehold in violation of NYPD policy. But because so much time has passed since the events in question, CCRB prosecutors must prove that Pantaleo actually committed state crimes corresponding to those departmental violations: reckless assault in the third degree, and strangulation in the first degree. O’Hare ran through each of the elements of each crime, arguing that the court has been shown evidence that proves each one.

Pantaleo’s hold on Garner constituted reckless assault because it did him injury, as evidenced by the autopsy findings of bruising deep into his neck muscles, and the autopsy conclusion that the chokehold was the instigating cause of his death, she said. It was reckless because Pantaleo had been trained not to use a chokehold, and he used one anyway. Even if he did not set out to put Garner in a chokehold, he had an obligation to release him as soon as he realized he was holding him by the neck, and he did not do so.

O’Hare showed a freeze-frame of the video of Garner’s arrest, depicting the moment when Pantaleo grabbed Garner from behind, and failing to secure a grip around his chest, instead bent his left wrist to achieve a better grip around Garner’s neck.

Pantaleo’s lawyer’s argument that he was attempting to put Garner in a “seat-belt hold” does him no favors, O’Hare argued, as records indicate he never received any training on such a hold. Using a technique he was never taught or trained on is itself reckless, O’Hare said. “If you do it wrong, someone can get hurt. Someone can get killed.”

As to the strangulation charge, O’Hare said, Pantaleo applied pressure with the intent of impeding Garner’s breathing, and caused him serious injury in doing so. Even if Garner’s asthma played a role in his death, the precipitating incident was Pantaleo’s chokehold, as the Medical Examiner’s report concluded, O’Hare said. Pantaleo had been trained that chokeholds were dangerous and lethal. That Garner was not in perfect health does nothing to excuse the recklessness of using a banned hold Pantaleo had been warned against, O’Hare said.

O’Hare quoted the NYPD Patrol Guide: “The primary duty of all members of the service is to preserve human life.”

“That is why respondents contention that Eric Garner killed himself by not complying is so offensive,” O’Hare said. “Police Officer Pantaleo had a duty of care to Eric Garner, and this deadly result was foreseeable.”

Outside One Police Plaza after the trial concluded, Garner’s mother Gwen Carr, pledged to carry on her fight for justice beyond the media spotlight that the trial has attracted.

“I’ll be up in Albany, I’ll be in City Hall, I’ll be everywhere,” she said. “They’re going to think I’m kin to them, because I’m going to be holding on to their coattails, until I get justice.”

#CCRB
#chokehold
#daniel pantaleo
#eric garner
#police misconduct
Do you know the scoop? Comment below or Send us a Tip