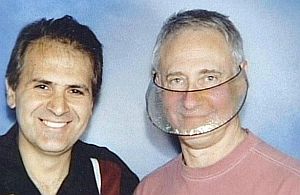 A New Jersey man says he was burned by Christie’s and CBS Paramount when they knowingly dumped counterfeit Star Trek memorabilia at an auction in October ‘06. Diehard Trekkie Ted Moustakis has filed a $7 million dollar lawsuit against the auction house and the producers of Star Trek who supplied the disputed items, which included Data’s poker visor – made but never worn – in an episode of Star Trek: Next Generation, a “one of a kind” uniform worn by Data and the poker table from the episode.

Moustakis won a lottery to attend the auction, which raked in $7.1 million in all, with the highest bids going to items like the $576,000 model of the Starship Enterprise. (SNL Youtube moment; Shatner to Trekkies: “Get a life people! Look at you! You’ve turned an enjoyable little job I did as a lark for a few years into a colossal waste of time!”) Moustakis lived happily with his keepsakes for some time until his world was shattered at a Vegas Star Trek convention, where he paid $200 for a photo op with actor Brent Spiner, who played Data (pictured above in visor).

"When I approached, [Spiner] saw the visor, and he said, 'That's not my visor. You bought that at Christie's' " Moustakis recalled. Spiner told him he had sold off the visor himself on eBay and had warned the auction house they had a fake. A dejected Moustakis then researched his other items and found CBS had been selling numerous versions of Spiner's "one-of-a-kind" uniform and that the table he had bought had slight differences from the one that was on the show.

Ultimately, the disillusioned Moustakis only dropped $13,600 on his ersatz souvenirs, so the extra millions he’s seeking are probably due to the emotional distress caused by the forgeries. Christie’s and CBS are standing by the items and seem prepared to bring their phasers to court. Will Data take the witness stand? Will the jurors find Christie’s defense highly illogical?