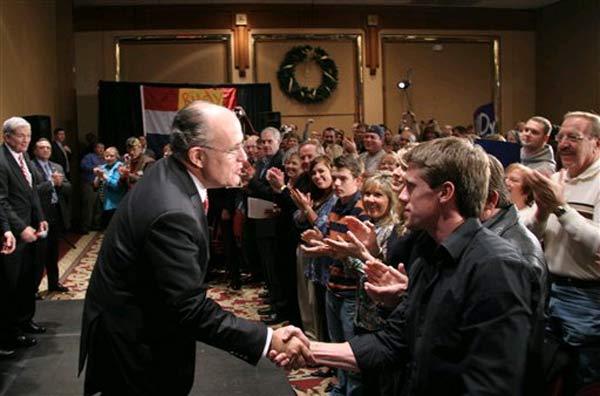 Former mayor Rudy Giuliani was hospitalized for flu-like symptoms at a St. Louis hospital last night. But it turns out he doesn't have the flu.

Giuliani was flying out of the Show Me State back to New York, but then turned the plane around because he wasn't feeling well. His communications director Katie Levinson said, "After precautionary tests the doctors found nothing of concern at this time and Rudy will be going back to New York later today. He is in high spirits and is grateful to the doctors and nurses who checked him out." In other words: No flu bump!

Giuliani was campaigning in Missouri, focusing on its February 5th primary, seemingly giving up on his chances in New Hampshire and Iowa. Giuliani likened his approach of focusing primaries in Missouri, California, New York and other big states to being a 9-inning baseball game: "whoever gets the most runs at the end of nine innings wins. So here, you've got to play in 29 primaries. Nobody's going to win all of them, that's for sure. I think on the Republican or Democratic side, that has never happened in contested primaries with great candidates. They've never won every single primary...I call it a proportionate strategy.” Of course, some people think it's pretty risky.

Getting a flu shot is one way to help prevent the flu, but others include "Avoid close contact with people who are sick" and "Clean your hands", plus getting a good night's sleep - things that are more difficult when you're campaigning for long hours.