Treading the (Beach) Boards in Blue 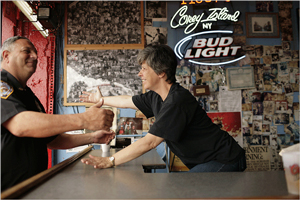 The New York Times has a great story about police officer John Nevandro, who has been patrolling the boardwalk at Coney Island in Brooklyn for 21 years. When he started walking the beachside beat, he had to chase off perverts looking to glance up women's skirts from below the boardwalk. Now he knows the boardwalk so well that he can tell which sections need repair from the sound planks make as he rolls over them in his NYPD golf cart.

Nevandro worked four summers on a seasonal patrol beat before transferring to Brooklyn's 60th Precinct full time in 1989. That was 25 years after the Drifters recorded "Under the Boardwalk", which immortalized the idea of lovers seeking some privacy in the shade by the shore, something Nevandro himself admits to doing in his Brooklyn youth. In 1994 the Army Corps of Engineers pumped tons of sand onto the beach, raising it to almost the height of the boardwalk itself. The lack of head room deterred casual visitors, and in turn encouraged homeless people to turn the shoreline shelter into their home. The city installed a fence to block access, but Nevandro says this has created its own problems with the infrastructure of the boardwalk itself, as sand drifts accumulate.

“You have sand right up to the boards, and it’s holding that moisture to the boards,” Mr. Maher said. “It certainly helps to speed up the deterioration of the boards because moisture’s not good for wood.”

Nails pop up and wood splinters and bows. Repair begets repair. Replacing a board on the boardwalk is more complicated than it sounds, when the new wood is too hard to nail through, and the wood supporting the board is too rotten to support a new screw.

Although Nevandro is well known to denizens of the Coney Island community, he has never been a big fan of the rides themselves. It wasn't until ten years ago, when hearing that their co-worker had never been on the Cyclone, that a quartet of cops dragged Nevandro onto the wooden roller coaster. He swears he will never repeat the experience.

The veteran was on patrol when Joey Chestnut brought the Mustard Belt back to the U.S. by winning the 4th of July Nathan's hot dog eating championship. And he was talking to workers at Astroland when a call came across his radio later that day that someone had shot himself in front of a lifeguard. The man said "Call the police," just before shooting himself in the face on the crowded holiday beach. Officer John Nevandro answered the call. We recommend reading the full piece in the Times.

(Photo by Oscar Hidalgo for The New York Times)