Last month, a black teenager who was walking through a Florida gated townhouse community—to his father's girlfriend's home—was fatally shot by the captain of the neighborhood watch. While George Zimmerman called the police to say, "There's a real suspicious guy. This guy looks like he's up to no good or he's on drugs or something," and was told he didn't need to follow the teen, Trayvon Martin ended up dead. And the teen was unarmed and just carrying Skittles and iced tea. Zimmerman was never arrested, claiming self-defense, but after weeks of criticism from Martin's family and their supporters, and the recent release of 911 tapes, the Justice Department has confirmed it will investigate the shooting.

A DOJ spokesperson said, "The department will conduct a thorough and independent review of all of the evidence and take appropriate action at the conclusion of the investigation. The department also is providing assistance to and cooperating with the state officials in their investigation into the incident."

Florida's Seminole County Attorney General said a grand jury would be convened to look into the matter as well, but this comes only after weeks of complaints about the law enforcement not taking the investigation seriously. The Miami Herald reports, "From the start, Trayvon’s family accused Sanford police of molding the investigation to fit Zimmerman’s account. Several witnesses said they heard cries that sounded like a boy wailing — howling silenced by the crack of gunfire — and were shocked to hear police later portray the cries as Zimmerman’s. One witness said police ignored her repeated phone calls." You can listen to the 911 calls here.

A lawyer representing Martin's family says that the teen was on the phone with his girlfriend before being shot and Martin told her that he was being followed: "He's just a kid trying to get home from the store and get out of the rain, that's it, nothing else." 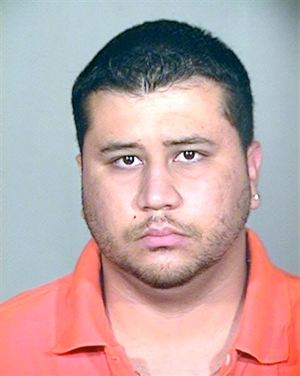 George Zimmerman is seen in a 2005 police mug shot provided by the Orange County, Fla

Zimmerman is characterized as a passionate neighborhood watch volunteer (he was the only one to offer his time for the position) and would frequently call police about garage doors and suspicious people. According to the Herald, "Licensed to carry a firearm and a student of criminal justice, Zimmerman went door-to-door asking residents to be on the lookout, specifically referring to young black men who appeared to be outsiders, and warned that some were caught lurking, neighbors said. The self-appointed captain of the neighborhood watch program is credited with cracking some crimes, and thwarting others."

Florida has a "Stand Your Ground" law, which Slate explains, "The idea was to give people who think they are being threatened the right to use force: They can protect themselves without first trying to retreat." The law is applicable anywhere, and a former Broward County prosecutor said, "The ultimate intent might be good, but in practice, people take the opportunity to shoot first and say later they had a justification. It almost gives them a free pass to shoot."

The Reverend Al Sharpton is going to be holding a rally in Florida on Thursday night and said, "It is an atrocious miscarriage of justice, and we demand that authorities in Florida arrest Zimmerman immediately and charge him for the crime of murder. Anyone with sound reasoning cannot disagree."

And in NYC, at Union Square tomorrow at 6 p.m., a "Million Hoodies March" rally is being organized. Organizers are trying to get 1 million signatures on a petition supporting the prosecution of Zimmerman and, with the Union Square gathering, "Throw on your hoodies and come gather in Union Square to show your support for justice for Trayvon Martin! A black person in a hoodie isn't automatically 'suspicious'. Let's put an end to racial profiling!" Tomorrow is also the UN International Day for the Elimination of Racial Discrimination.