Things just keep getting messier and messier with the investigation into the Trayvon Martin shooting: according to ABC, the lead homicide detective probing the fatal shooting recommended that neighborhood watch captain George Zimmerman be charged with manslaughter. Investigator Chris Serino, of the Sanford Police Department, expressed doubts about Zimmerman’s claim he shot Martin in self-defense, but Serino was instructed to not press charges because the state attorney's office said there wasn't enough evidence to lead to a conviction. And now, thanks to that and many other leaks, a new special prosecutor and a team of investigators have been assigned to the case, and have begun to quietly re-interview witnesses and examine evidence—CBS says the investigation "is essentially starting from scratch."

While special prosecutors wouldn't confirm that report about the homicide detective, she did confirm police went to the state attorney with a capias request ("We’re through with our investigation and here it is for you"). A source inside the Seminole County State Attorney's office told the Orlando Sentinel: “If you go with what was reported in the press the first night, there would have been an arrest right away, but obviously something gave investigators pause. We get capias warrants all the time. That doesn’t mean we file charges right away. We investigate to see if it’s appropriate. That’s the responsible thing to do.’’

Martin's parents, Sybrina Fulton and Tracy Martin, spoke before Congress to demand justice for their son: “The reason we’re here is that it is now more than 30 days and there still is no arrest,” said the Martin family attorney Ben Crump. Tracy Martin was asked by reporters after the forum if he had a message for Zimmerman, who has been in hiding since the shooting: “The only thing I would have to say to him (is) why did he have to take my son’s life?” the father said. Referring to the new Black Panther's $10K bounty on Zimmerman, Fulton added: “We recognize that a lot of people are doing things on behalf of Trayvon Martin. We’ve decided that we want things to be done peaceful.” 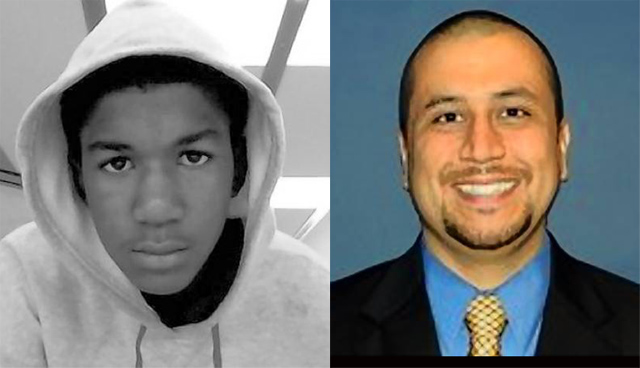 Zimmerman, who reportedly is “distraught” over the incident and has been praying non-stop for the victim ever since, isn't the only one staying out of the public eye. Friends and family of Zimmerman say they are too scared to come to his defense publicly: “The family has had death threats, the father and mother, George has had death threats. Anything related to George is a target,” said Miguel Meza, who identified himself as Zimmerman’s cousin. Even Zimmerman's lawyer fled an interview with MSNBC's Lawrence O'Donnell, and O'Donnell claims it was because he was scared of his questions:

Craig Sonner has been the first guest in the history of this particular show, to get scared, to be terrified, so terrified of coming on this show that he has literally run away. He's in our car right now, taking him home from our studio, afraid to face the questioning he would face on this show.

But maybe he was just scared of how some have been acting lately: an L.A. man named Marcus Higgins tweeted what he believed was Zimmerman's address to several celebrities, including Spike Lee, who retweeted it to his 240,000 followers. Unfortunately, it turned out the address was for a different Zimmerman—and elderly couple David and Elaine McClain who live at that address are said to be “living in fear” as a result.

#death
#fatal shooting
#florida
#george zimmerman
#investigation
#police
#trayvon martin
Do you know the scoop? Comment below or Send us a Tip