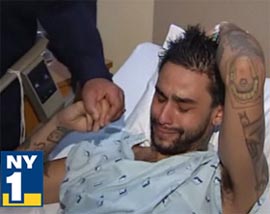 After the first day of grand jury testimony, things do not look good right now for Officer Richard Kern, one of the cops accused of sodomizing Michael Mineo while he was being detained in the Prospect Park subway station last month. Yesterday Officer Kevin Malone, one of the other officers who arrested Mineo on October 15th, testified that he saw Kern place his metal baton against Mineo's left side and run it from left to right across his buttocks as Malone was handcuffing him. That baton is about 2 feet long and 1-1/4 inches in diameter.

It had previously been believed that Mineo was sodomized with an antenna, likely because he was reported to have yelled something along the lines of "Why are you sticking a radio up my ass?!" Kern allegedly responded to that, "This guy is an EDP (emotionally disturbed person)." Later when Mineo, who cops had suspected was smoking marijuana, was only issued a summons for disorderly conduct, Kern is alleged to have warned him not to complain, or else the charges could be upgraded to a felony.

Mineo also testified before the grand jury yesterday after arriving at the courthouse walking with the assistance of a cane. He claims that he has not been able to sit down in the three weeks since the incident took place. He also says that he feels jumpy when he hears police vehicles. Mineo told press outside the court yesterday, "At first, I felt like people weren't believing me. And, you know, now that things are coming to the light, I feel a little bit more better that I know these cops are going to brought to justice."

Yesterday it was revealed that the NYPD paid $50,000 to settle two brutality charges made against Officer Kern last year. He had been cleared in the instances by the city's Civilian Complaint Review Board.