Transgender Need Not Apply At J.Crew

[UPDATE BELOW] The latest company being called out for their discriminating hiring practices is J. Crew (following the lead of Prada, American Apparel and scores of others). Today a rally will go down at 1:15 p.m. in front of their 5th Avenue location, after a non-profit group called Make the Road New York filed a complaint with the NY Attorney General's office.

The group says the preppy proprietor might as well post a "transgender people need not apply" sign on their door. They recently put the company's Manhattan retail store to the test, (along with 23 other retail stores), sending a transgender and a nontransgender to apply for jobs—with everything else (age, race, experience) matching on their resumes. The full results can be seen after the jump. The group's report "also found a 42 percent net rate of discrimination for transgender job applicants... [and] 49 percent of transgender workers surveyed reported that they have never been offered a job in the time that they have lived openly as transgender."

More specifically, one of the transgender employment testers, Julian Brolaski, applied at the 5th Avenue J. Crew store and "was treated brusquely, told to fill out an application and was never called. His testing partner, Leigh Cambre, who entered the store a few minutes later, described a very different experience, 'I filled out an application, was interviewed on the spot and offered a job soon after.' A separate pair of testers documented a similar situation." 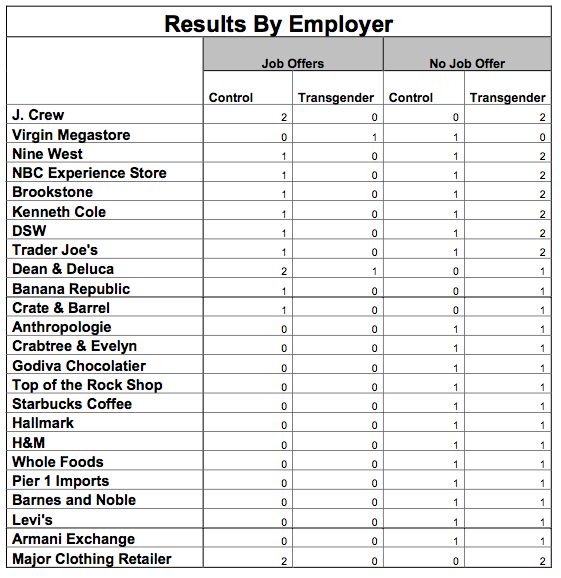 #discrimination
#j.crew
#rally
#transgender
Do you know the scoop? Comment below or Send us a Tip
A new Gothamist is coming! We’ve moved comments over to our beta site. Click here to join the conversation and get a preview of our new website.