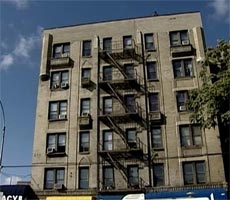 A young couple in the Bronx died yesterday when they fell off a roof and plummeted six stories where their bodies landed entwined together in the courtyard below. Both police as well as friends and family of Michael Rodriguez, 21, and Melissa Lopez, 19 believe that their death was an accident and not a suicide. But it is unclear exactly why the couple was on the roof of the Parkchester building at 4:30 a.m., miles from where they lived.

The couple had been enjoying a night out at Club Mohegan in the Bronx and then were hanging out in a friend's apartment before making their way over to the location which they fell from. Police say that the building is a known hangout for young people in the area and has a low parapet. A police source told the Daily News, "She apparently lost her balance, and he may have gone to grab her because there was only one thump, and it looked like they were intertwined when they fell."

Friends and family put together a memorial with photos and candles at the site where the accident took place. Rodriguez was training to be an electrician and was a graffiti artist who went by the name "JINX." Lopez was in school to be a hair stylist. The couple had known each other since middle school and were dating for two years. Rodriguez's mother described their relationship as "puppy love."

#bronx
#fall
#fall from building
#melissa lopez
#michael rodriguez
Do you know the scoop? Comment below or Send us a Tip
A new Gothamist is coming! We’ve moved comments over to our beta site. Click here to join the conversation and get a preview of our new website.