Traffic Deaths Declined In 2014 For Everyone Except Cyclists

The DOT released data last week declaring that traffic fatalities hit their all-time low in 2014, a laudable accomplishment, sure. But it's worth a closer to look to see for which groups the numbers are actually dropping: According to Streetsblog, fatalities among vehicle occupants have plummeted from 146 in 2001 to a low of 52 in 2011, spiking slightly to 59 last year. Pedestrians, too, fared much better in 2014 than in years prior: 132 were killed in 2014, versus 194 in 2001. 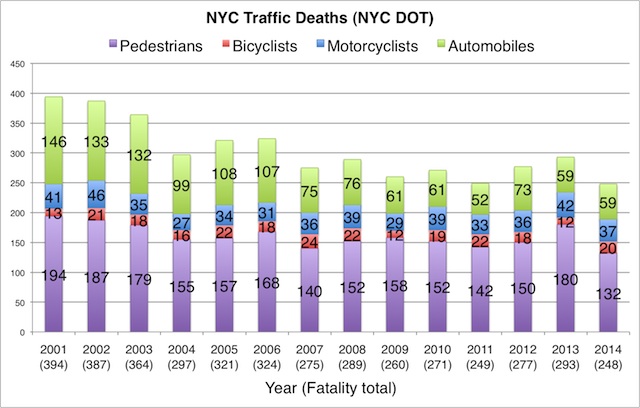 Cyclist fatalities, though, are less clear—while bicycling has become increasingly popular, and bike lanes continue to proliferate across the city, 2014 still saw 20 cyclist deaths, versus 12 in 2013.

The goal of Vision Zero is to eliminate traffic deaths completely by 2024, a goal that will only be realized if the current administration kicks it into high gear—aggressively policing and prosecuting reckless drivers, continuing its practice of creating arterial slow zones near notoriously deadly intersections and aggressively expanding the network of bike lanes. We can only blame cyclists crashing into the backs of buses for so much.

#pedestrian fatalities
#traffic deaths
#vision zero
Do you know the scoop? Comment below or Send us a Tip