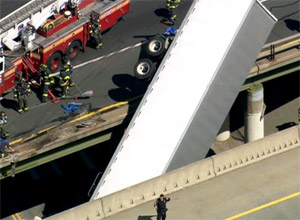 Yesterday afternoon, a tractor-trailer dangled from the side of the Staten Island Expressway. Authorities believe the driver, James Christian of North Carolina, may have lost control of the rig when another car stopped short.

The tractor-trailer fell off the SIE onto South Avenue - hitting the front of 61-year-old Jenetta Christopherson's car. Christopherson, who was driving with her baby granddaughter, said she was lucky she braked when she heard a loud noise above her, "If I kept going, he would have ended up on top of my car."

Another driver on South Avenue swerved onto the sidewalk to avoid the truck; Dion Serrano told the Staten Island Advance, "All I saw was the bottom end of the truck, the bottom end, just tires, flying over me."

The truck's cab was crushed and Christian was removed by firefighters. He suffered a number of broken bones and is in stable but guarded condition at Richmond University Medical Center. A crane lifted the tractor-trailer (which was empty, after a delivery in Brooklyn) from the scene a few hours later while the FDNY soaked up 100 gallons of fuel.

#All I
#baby
#brooklyn
#fdny
#If I
#medical center
#News: NYC
#North Carolina
#staten island
#Staten Island Advance
#staten island expressway
#the tractor
#university
Do you know the scoop? Comment below or Send us a Tip