The block-circling public art project in Williamsburg depicting silhouettes of 264 people killed in crashes in New York in 2014 wasn't even half finished when an 18-wheeler plowed into it.

Road-safety activists with the group Right of Way spent about 10 hours Saturday installing the mural along the construction fence around the first piece of the Domino Sugar Factory mega-development. The display had the blessing of developer Two Trees, which had previously allowed a BMX course and a garden in the long-fallow lot. Volunteers had only been working for a few hours on Saturday when the semi with Wisconsin plates took a right off of South 4th Street onto Kent Avenue, right into the wall.

Organizer Keegan Stephan was standing closest. The crash pulled parts of the plywood fence from its frame, and he said he and other volunteers who were wheat-pasting posters down the block had to jump back to avoid being struck. The driver could have done worse.

"Fortunately he just hit a wall," Stephan said. "If someone had been standing there that person would be dead."

The truck comes into play at about 1:40 in the video below.

Right of Way: 2014 NYC Memorial Mural "Killed by Traffic" from STREETFILMS on Vimeo.

Narrow South 4th Street, it should be noted, is not a truck route. The driver spent the next 30 minutes to an hour trying to work his way out of the tight spot, according to Stephan, and after trying and failing to make it onto the main roadway of Kent Avenue, he settled for the next best thing: the separated bike path.

The remainder of the day proceeded without incident. About 40 people showed up to help with the installation, according to Stephan, including family members of several people memorialized on the wall.

The art for the memorial was created in January, when WNYC's authoritative tally of traffic deaths for the year stood at 264, according to Right of Way. Since then, the NYPD has released information that puts the final tally closer to 269, as more people have succumbed to injuries sustained in crashes last year. 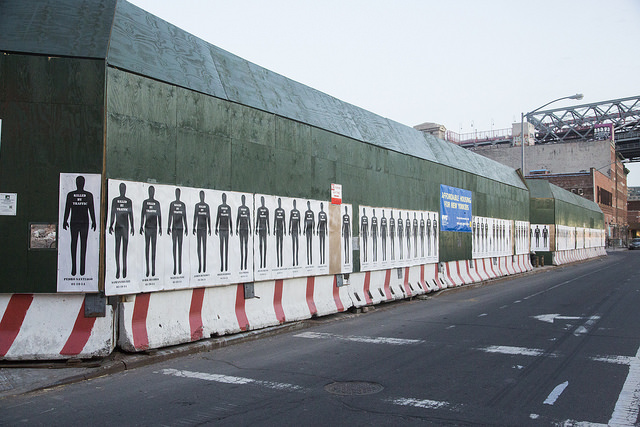 The mural commemorating those killed in crashes in 2014 spans two and a half sides of a city block. (Rabi Abonour/Right of Way)

"This is just pure love. Love for people that are no more," said Franci Brenner in a video interview with the activists.

Brenner is mother of Matthew Brenner, who died after being hit while biking near an entrance to the Manhattan Bridge in January 2014.

Update: Updated to reflect that Right of Way had permission to install the mural.

#Domino Sugar Factory development
#right of way
#vision zero
Do you know the scoop? Comment below or Send us a Tip