The relationship between police and cyclists been notoriously adversarial ever since the Republican Convention in 2004, but both groups came one small step closer to working out their differences last night at the April meeting of the New York Cycle Club. Held in the basement of a midtown bar, the meeting featured a panel comprised of some of the city's most prominent "cycling stakeholders"—Paul Steely-White, executive director of Transportation Alternatives and Josh Benson, the DOT's Director of Cycling and Pedestrian Programs, sat to one side, and to the other, Captain Jessica Corey, Commander of Manhattan's Central Park Precinct, and Inspector Michael J. Hurley, Adjutant of Patrol Borough Manhattan North.

The discussion was moderated by longtime NYCC member Eden Weiss, though questions were primarily selected in advance and discussion remained civil throughout the hour-long talk. Here are some of the more sweeping topics covered in discussion:

With Citibike stations finally starting to surface, one questioner asked the DOT rep how he thought new cyclists would fare wobbling down the crowded city streets. Predictably, Benson was optimistic. "I personally don’t think it’s going to lead to chaos," Benson argued. "I think we have so many cyclists out on the streets, and we’re all out there setting a good example, I don’t think you’re going to see people hopping on these bikes and doing crazy stuff. I think it’s important for all of us to keep cycling with that in mind, that we’re setting an example for these people who want to take bikes out for the first time."

He added that New York has "one of the best networks of bike lanes in the country, and it's getting better by the day. I think that’s really going to make this all possible. People have a place to be when they’re biking, so there’s going to be a lot less friction between cyclists, pedestrians, motorists than there would otherwise be if there weren’t segregated bike lanes. I think we’re set up very well." 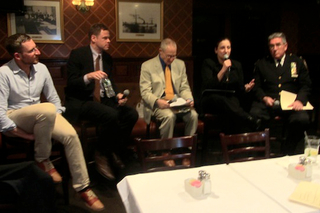 Will all the cycling progress end on January 1, when Bloomberg is out of office?

When it came to the new mayor, neither Steely-White nor Benson expressed particular concern. "We've changed the city in ways people enjoy," Benson said. "It would be shocking to me to see that happen." Steely-White agreed, sharing with the audience the one of his favorite quotes from Cycling Messiah Transportation Commissioner Janette Sadik-Khan, who said, apparently, that "bIke lanes are polling better than any mayoral candidate right now."

Do police have a bad attitude toward cyclists?

Capt. Corey fielded this one carefully. "I don't know that we have that attitude. I think that's perception," she said, calling policing the park "a balancing act" and adding that "we really strive for everyone to enjoy the park."

"What we’re looking to do is enforce reckless behavior. We value your right to cycle in the park, we respect your right to do that, but we also have to allow people to cross the road. If you’re riding through the park and you’re enjoying yourself in the park, you should probably never have to speak with us."

Should cyclists get off easier than drivers for running red lights?

"The punishment is not in the purview of the police department," Hurley said. "I certainly don't think we're targeting cyclists. Enforcement is really just tough love to cyclists—we're trying to keep them from getting injured." He added that "speeding is top priority, along with DWIs and texting while driving. We take it very seriously."

But Steely-White disagreed. "The NYPD is doing very, very little speed enforcement at the moment," he said.

What about cars parking in the dang bike lanes?

Bike lanes with barriers are the key to keeping cars and drunken wanderers out of the path of cyclists, Benson said. "To rely strictly on enforcement, we’re going to have a real uphill battle." The only real way to keep non-cyclists out of the bike lane, then, is to erect barriers around all of them.

In the end, all of the panelists agreed that when it comes to specific streets and issues, concerned cyclists and pedestrians should make their voices heard with their local community boards and police precincts, which hold community meetings once per month.

"The best way to get your concerns out is on the local level," Hurley said. "Let's face it—the squeaky wheel gets the oil."

#cycling
#New York Cycle Club
#nypd
#pedestrians
#original
Do you know the scoop? Comment below or Send us a Tip