An argument between Chilean tourists and two women who manage tips for desnudas got physical on Wednesday night in Times Square, leaving both tourists with cuts on their faces.

Cops say the altercation happened just before 5:30 p.m. in front of the Times Square Marriott, on 45th Street near the corner of Broadway. Tourist Francisco Vistoso and his brother-in-law reportedly posed for a picture with a desnuda inside a green-painted Designated Activity Zone [DAZ], prompting a disagreement about the appropriate amount to tip.

So-called "aggressive solicitation," which includes obstruction of pedestrian flow and intimidation tactics like touching or following an individual, is illegal in NYC.

One witness told NBC that the tourists handed over one dollar. Two of the desnuda's managers stepped up to ask for more, and tension escalated when Vistoso allegedly called one of the women a prostitute.

Vistoso claims that the desnudas got physical first. "They came to us saying it [the tip] was too little," he told NBC, in Spanish. "They started insulting [my brother-in-law] and then the woman came and attacked me."

But one of the desnuda managers, a woman whose name was not immediately available, told police that Vistoso hit her first. She then allegedly pushed Vistoso's glasses, cutting his forehead with them.

"He hit me, and I pushed him back," she told police in an exchange captured by NBC's cameras.

The anonymous witness blamed Vistoso for escalating the situation with insults. "The tourist is guilty," he said. "He was rude, and all she asked for was a tip."

Police only confirmed that the assault was precipitated by a "verbal dispute with desnudas." Vistoso's brother-in-law, 48, filed a complaint with the department alleging that he was punched in the face. The encounter left him with a bloody nose and cut lip. 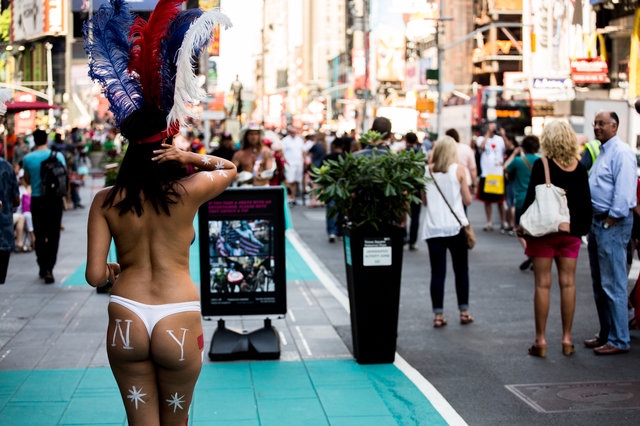 A desnuda in Times Square earlier this year. She was not involved in yesterday’s altercation. (Scott Heins / Gothamist)

Last month police began enforcing eight painted activity zones in Times Square, where costumed characters, desnudas, and other performers are required to stand while working for tips. While the zones were instated by the Department of Transportation, the NYPD enforces them. Anyone caught posing or requesting a tip outside the zone is subject to fines that up to $500, and after multiple offenses, jail time.

The Times Square Alliance, a business interest group that advocated heavily for the DAZ, said Thursday that last night's encounter enforces the need for policing on the square.

"This is a reminder of the value and importance of the NYPD policing these zones and the potential damage to New York City's tourism jobs when aggressive hustlers erupt in violence," a spokesperson for the group stated.

Saira Nicole, 30, works as a desnuda in Times Square. She was not present during yesterday's dispute, but says that she knows the women involved. She heard secondhand that the tourists were calling them whores—not an uncommon interaction, in her experience.

"I don't necessarily agree with how they handled the situation," she said on Friday, via text message. "There's no reason for fighting or bloody tourists."

"If someone is harassing me I put my robe on and have a seat or look for a police officer," she added. "I'm not saying the man was innocent but there's just a better way of dealing with his type. Even if we [desnudas] don't necessarily all work together, we are effected by each other['s actions], especially when incidents like this occur."