The photo of 7 women cheerfully taking a selfie on 2nd Avenue—as buildings crumble and burn behind them, and victims of the explosion remain missing—was almost unbelievable. The selfie stick, the beaming smiles... surely this was Photoshopped. It wasn't. The very real photo quickly spread online yesterday, and this morning the NY Post has put the young women on their cover, with the words: VILLAGE IDIOTS.

Things are not going so good if the NY Post is, quite rightfully, calling you "tasteless" and "heartless."

This wasn't the only selfie moment that surfaced. Christina Freundlich also took a selfie while standing in front of the tragic disaster site—she's flashing a smile, a peace sign, and notes in her caption that this is the "scene of the accident."

She posted the photo to her Instagram yesterday, but deleted it sometime around 9 a.m. EST today. 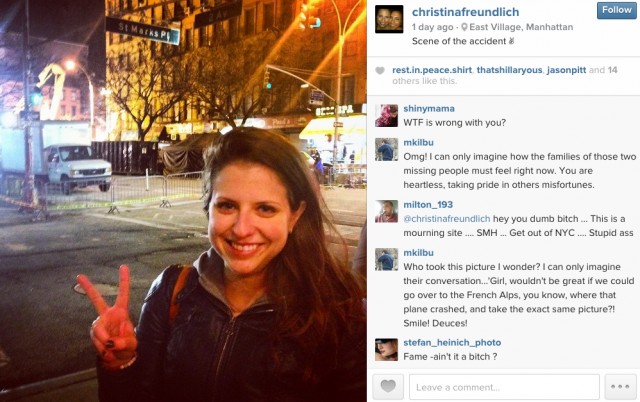 The Post also notes that the East Village explosion site has become "a tourist attraction," with some nearby building residents putting up signs. One reads, "Gawkers: Please keep off our stoop. Gawk from the street," and another: "This is a tragedy. Not a Tourist Attraction. Show Some Respect."

To restore your faith in humanity, let's revisit the below video, which captures the chaotic scene moments after the explosion on March 26th. It shows New Yorkers rushing to help those in the buildings before emergency crews arrived.

UPDATE: Christina Freundlich emailed The Des Moines Register, saying she is "deeply sorry for my careless and distasteful post. It was inconsiderate to those hurt in the crash and to the city of New York. What happened last week in the East Village is not to be taken lightly and I regret my course of action."

#Christina Freundlich
#don'ts
#east village explosion
#selfies
Do you know the scoop? Comment below or Send us a Tip