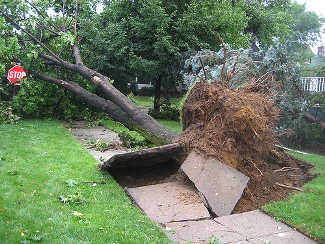 Residents are trying to clean up after the mess of yesterday's EF2 tornado that touched down in Brooklyn. At least 40 homes, many in Bay Ridge and Sunset Park, and buildings were damaged. The tornado touched down first at 6:30AM, with winds of over 100 miles per hour, making it the first in the borough since 1889 (there was an F1 in Staten Island in 1995; a F2 in Queens in 1985). Interesting fact: While tornadoes are most likely to occur in the Midwest in spring, they can happen at any time of year and have touched down in all 50 states.

A number of people were left temporarily homeless, and the police found some immigrants cramped into Sunset Park basement. The Brooklyn Eagle has information on help filing insurance claims and McBrooklyn tracked the tornado's path in Brooklyn. Additionally, here's more information from the city's Office of Emergency Management.

And guess what, everyone? There's a flash flood watch for the New York City and NJ tonight through tomorrow. With three inches of rain expected, Governor Spitzer promises, "We are watching the weather system," but you might want to bring home some work files.

CityRoom has the scoop on the MTA's strategy to avoid another total subway system standstill. According to MTA CEO Lee Sander, the agency is "strategically placing pumps throughout the system at potentially flood-prone locations, strategically placing management and customer personnel at key stations throughout the system to help our customers navigate in case of service disruptions. We’ll be adding additional support personnel — such as signal ventilation and drainage maintainers — so that we can immediately address any situations that may arise." Too bad the server upgrade isn't happening till next week.

The MTA is also putting more buses in reserve, just in case. Eek.