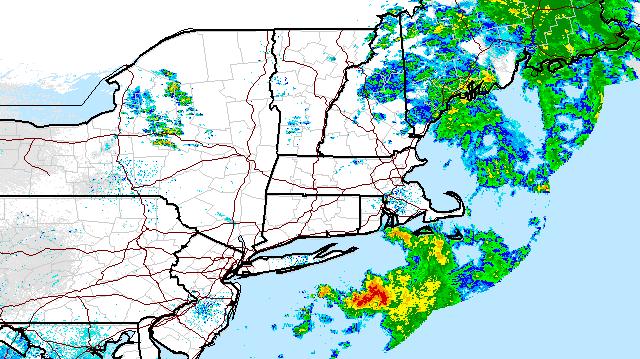 As a reader reported earlier, a tornado may have touched down in Bay Ridge. Funnel clouds were spotted early this morning and a tornado warning was posted for Brooklyn, Queens and parts of Nassau County. We won't know if the damage was caused by a tornado, microburst, or straight line winds until the National Weather Service sends out a forensics team to investigate.

Now that the rain is gone, 2.5 inches in Central Park and at LaGuardia, 3.47 inches at JFK, we can expect a totally miserable day! Oppressive heat and humidity are in store, with a heat advisory in effect from one to six this afternoon. Today's high will be around 90 degrees. The Weather Service is predicting a high of 94, but their forecasts have been running several degrees warm since last week. The dew point temperature is in the mid-70s.

With that much humidity our bodies simply can't cool by evaporating sweat. Thus fans become useless as cooling devices. In response to the heat the city has opened cooling centers around town. If you have to be outside, the shade is your friend, as is drinking water and avoiding strenuous activity.

Relief is in store for tomorrow. A cold front will filter down this evening, bringing us a cooler, drier Thursday. Friday will be even cooler, but there's a good chance of rain. Everyone will be happy if Saturday turns out to be as sunny and mild as expected.

Radar map showing the storm well out to sea from the National Weather Service.

#As
#bay ridge
#brooklyn
#central park
#drinking
#heat
#JFK
#joe schumacher
#manhattan
#nassau county
#national weather service
#queens
#rain
#running
#the city
#The Weather Service
#tornado
#weather
#weather service
Do you know the scoop? Comment below or Send us a Tip
A new Gothamist is coming! We’ve moved comments over to our beta site. Click here to join the conversation and get a preview of our new website.