While they were laying low for a few days after the Daily News decided to make (Mayor de Blasio make) them Public Enemy #1, topless, body-painted ladies spent their Saturday as tourists' #1 Times Square Attraction.

The women, also known as the "desnudas," accept tips when they pose for people's photographs, and since being topless and panhandling are Constitutionally protected, Mayor de Blasio has suggested ripping out the Times Square pedestrian plazas would be an elegant solution. Never mind that the other problems from costumed performers—anti-Semitic Elmo and child-shoving Cookie Monster during the Bloomberg years and bad Spider-Men (many of them) and groping Woody more recently—have never prompted such action. The Mayor later revealed he was forming a task force to solve a problem like Maria's boobs, and suggested the plazas might only be reconfigured.

Enter de Blasio hater, Governor Andrew Cuomo. He, too, is scared of breasts and thinks topless women are a step too far for Times Square, "I believe it is infringing on legitimate businesses. I think it is infringing on the investment that the state and the city made in the 42nd Street area, and I think it has to be stopped," and said it reminded him of the "bad old days." Sure, a handful of semi-naked ladies wearing headdresses is the same thing as junkies and dudes going to Peep-o-Rama, so he had his Empire State Development pass a resolution to specifically rid the area of the women.

Anyway, Cuomo's enforcers were on the scene yesterday: The State Police and members of the State Department of Labor descended on the stretch of Broadway between 42nd and 43rd Streets to speak to the desnudas. In one exchange, a Labor employee explained to one woman, Amanda, "We're just here to make sure that the working conditions are safe," to which she replied, "I don't have to answer. This is not a job. It's not a business." She added that she doesn't have set hours, "I come when I choose to come, I leave when I choose to leave."

The DOL worker continued, "And there's no issue with your safety? Would you prefer to speak somewhere else?" Amanda said, "No. No one works with me." 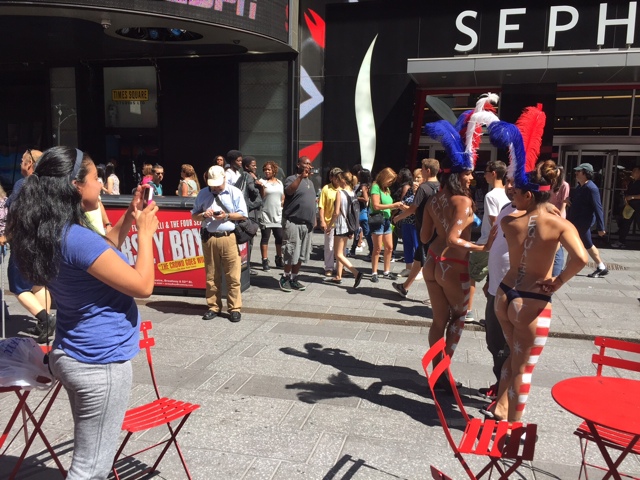 Based on what we saw yesterday, tourists flocked to the women, eager to take pictures with them. Even the onlookers not posing with the women were happy to enjoy the spectacle. With at least four NYPD police officers at the perimeter of the pedestrian plaza, the desnudas took photos with men and women, young and old, posing once to show their fronts and then posing again to show off their backs. Every so often, one of the women would drop off tips for Chris Oliveri to hold, explaining whose tips were whose.

Oliveri, who was arrested last week on an outstanding warrant after failing to appear in court for a trespassing charge, said the controversy was unfair and resented the News characterizing him as a "pimp." "I'm just painting them," he said, adding he was also there to help protect them. He suggested that the allegedly aggressive desnudas were other performers who were more desperate for money.

Looking at a pair of police officers in the distance, he said, "They're so mad. They want to get us."

One of the topless performers, Amanda, marveled at the presence of the state authorities "The State Police! That’s how powerful we are. They’ve never, ever come through here before. And the Department of Labor. Well they came up to me they asked me, um, basically oh what hours do you work, I said I wouldn’t call this working, because it’s not a job. I collect tips. That’s it. That’s all I have to tell them. And they were like, oh, okay? Do I have to be interrogated? No. Okay bye! It was a quick shutdown."

She observed, "You don’t see them going up to the costumes and asking them these questions, and I wonder why."

#Desnudas
#hypocrisy
#panhandling
#pedestrian plaza
#performer
#Times Square
#topless
#original
Do you know the scoop? Comment below or Send us a Tip