Gov. Cuomo waded into the Daily News's manufactured controversy over the topless painted women who pose for tips in Times Square and, following de Blasio's lead, said yesterday that the practice "has to be stopped."

Cuomo did not elaborate on what statute the women who call themselves "desnudas" might violate. Both female toplessness and panhandling are protected under New York law.

Cuomo praised the News's campaign, comparing it to the hard-nosed reporting of yore: "It reminds me of the old-school journalists, like Murray Kempton, Pete Hamill, Jimmy Breslin, Newfield, Barrett, where they would just take an issue and keep hammering the issue."

You know, Jimmy Breslin, who profiled JFK's gravedigger and got to know the Mafia inside and out. Murray Kempton, who chronicled the Panther 21. Smart journalists. Talented writers. Reporters who broke news on stuff that mattered.

Vowing a "very aggressive" crackdown during a press conference on Tuesday, Mayor de Blasio implied that he would use business enforcement tools to disrupt the women's livelihood, and try to come up with new laws without running afoul of the First Amendment, which he called a "thorny area."

Times Square's resident nearly-nude male, the Naked Cowboy, has avoided scrutiny in the tabloids due to his chromosomal makeup, but he also chimed in on the side of the concern-trolling puritans' crusade, donning a bra on Wednesday to signal we're not sure what exactly, besides that his competition should be put out of business.

"If everybody is pissed about it you should comply," he told DNAinfo. "I don't care if they got their boobs flapping around [and] you may have a legal right to do it—[but] it's about Times Square."

Mayor @BilldeBlasio leave the #Topless #TimeSquare #desnudas alone..It's called Art! if they're wrong then #TheNakedCowboy has to go too!

Civil rights attorney Ron Kuby told the website the government will have trouble trying to stop activity that is so clearly allowed by existing laws.

"You take two bare breasts, add the request for money which is legal, and you end up with legal behavior," he said. "Two boobs, one beg, equals lawful."

Not being able to resist getting some yuks in because, you know, boobs, Kuby added, "How do we get our hands around the problem? Simple solution, wait for winter."

Also taking the matter less seriously than our elected leaders was NY1 anchor Pat Kiernan, who delivered his "In the Papers" segment without a shirt on. 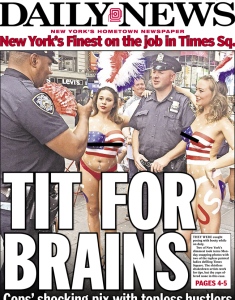 At least one desnuda, however, is not laughing. Kara James, who asked to be referred to by an alias because of harassment other desnudas have received since being quoted in the media, is very angry about the media circus and the promised end to her income source. A transplant to New York from Australia, she has been working as a painted woman for five months and appeared on the cover of Tuesday's Daily News (on the right).

She gave us a call, and sent us followup text-messages to tell us she feels misrepresented in the press, and exploited by opportunistic politicians. Her remarks are below, lightly edited for length, structure, and clarity.

We're kind of just sick of getting such a bad rep. And every time that we seem to try to talk to reporters or have anything to say to them, they just twist our words deliberately. I’m pretty sure they’re doing it on purpose because they want to make us look bad, obviously.

We wanted to talk to you guys. We know that at least you guys will report what we actually say.

We know there's a tawdry level obviously to this whole thing. We know there's a bit of a cheapening aspect to women being half-naked in Times Square. It's 2015, but we're not quite there yet with gender equality issues, having women be topless in the street, and having everyone be okay with it. We know that that's kind of an issue.

The thing that we're really sick and tired of having be said in the paper is that we're being run or that someone is our boss, that someone is making us do any of this stuff. We're all there of our own accord. We're all there because we wanna be there. The majority of us work for ourselves. One of the girls works with her husband. The rest of the girls work for ourselves and we hire people, usually our family and friends, to look after us, paint us, look after our belongings, that kind of thing.

When Charlie [Santos] and Ivan [Hernandez] gave the percentages about the money it wasn't meant to be taken so literally. It was just a generalized statement about the split. Everyone splits their money almost evenly because it is a group effort. We all design different artwork and change it around at times. 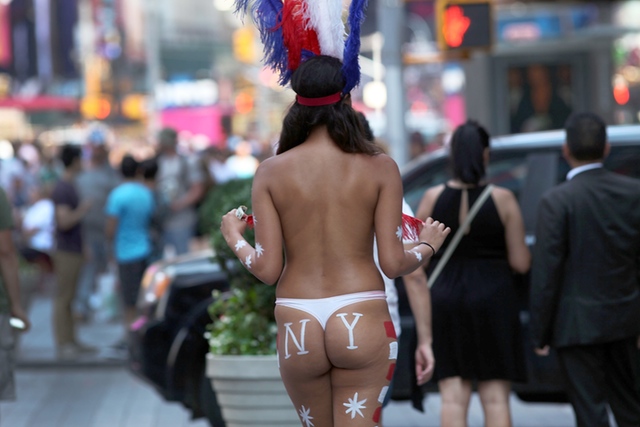 An example of the ever-changing desnuda artwork. (Getty)

We all hang out together as friends (let me clarify: not colleagues) and we never speak about the money because we all have manners and it is rude to do so. If we were really making so much money, do you really think we would be out here five days a week working 12 hour days?

We do make okay money. It's about the same as bartending in a regular bar in this city. But I prefer it a lot because I'm interacting with people; I get to look beautiful and wander around and talk to people from so many different countries; people smile and cheer us all day and it is, for the most part, enjoyable. People get excited when they see us. People give us their babies or take pictures because it's their wedding anniversary. People get to take a picture and have a memory of some gorgeous women in the crossroads of the world. And I don't have to feel like I'm ripping someone off like I would if I worked in sales, retail, real estate. Or feel like I'm contributing to someone's bad habit by serving them legal poison in a bar.

It's an honest transaction. It's up front and it's not expensive. People give anything from $1 to $20. A couple random occasions with group of men in [bachelor] parties or traveling sports teams have given me $50 for a group photo. But we don't try to force people to tip. If they don't want to tip, we say the same thing: "Have a nice day. Enjoy New York City!"

We're just really sick of being given the short end of the stick and being painted in such a bad light. Because we don't consider what we're doing as wrong at all. There are some people maybe out here that are a bit aggressive. But the main issue here is that the Naked Cowboy walks around in the exact same clothing as we do and nobody has a problem with it.

As soon as people started addressing, oh, this is gender equality, this is legal, then [politicians] started addressing the panhandling. I've seen it go on in Times Square, with the characters jumping into pictures, talking to the parents, and trying to get money out of them and stuff. It does happen with maybe some of the girls, but not all of us. It's really annoying that [reporters and politicians] keep putting us into the same group as though we all work together and we all work for the same person, like we're all aggressive bitches who are ruining Times Square for families and stuff like that.

The people who are writing these articles probably don't even spend any time in Times Square to see the amount of people that we help with directions, the free pictures we take with military personnel and disabled people, the other nice things we do. We buy food for homeless people every day. It really annoys me that there are these people who come to Times Square for half an hour and make these assumptions about us that are not true. 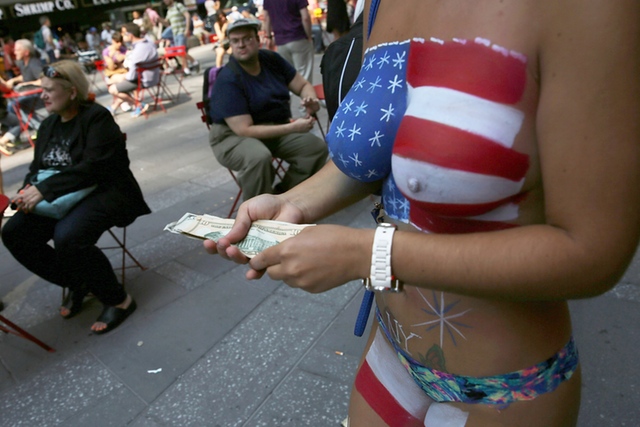 I feel like there's this underlying political agenda with this whole thing. I feel like the mayor is running for office again. This is something that he thinks he can do. He's trying to make us look like criminals so that he can show that he's doing something for the city.

But [de Blasio] can't do anything about it, so I feel like he's trying to deliberately criminalize us in the papers and be like, "Oh, look at me, I'm the best mayor. I'm going to take care of these girls and make New York City safe again." It's to make himself look better.

And that's really why I feel like this whole thing is being blown completely out of proportion, like there's 40 girls out there harassing tourists. There's maybe 16 of us, at most. And we're spread all throughout Times Square, not just in Times Square, but from Duffy Square all the way down to where H&M is. We're really spread out. It's not like there's hordes of girls chasing tourists. If people don't want to take a photo with us, we say, "Okay, have a nice day." And we walk away.

We're not like the characters that attack children and jump on them and say, "Oh, take a picture," and then 15 more characters jump into the photo and try to force the parents to pay them money.

It's just really driving me crazy. I feel like we're being criminalized on purpose for this mayor's agenda, and it's really annoying me, because I'm not a criminal. We'd like to set the record straight with someone who's actually going to report what we're saying. I understand you guys have to report both sides of it, but at least you're giving it a level perspective, not just saying, "Oh, look at these girls! Sensationalist headlines! Wow, look at these girls, they're harassing the tourists in Times Square."

In the newspaper, instead of reporting the nice things that people say about us, despite the fact that maybe 95 out of 100 people that walk past me smile at me or look happy or start laughing, or say hello, no, there's just one or two people that say, "Oh, it's disgusting" or "It's horrible." It's usually—and I hate to be rude about this—overweight women. They're the ones that are rude to us the whole day. To be honest, men don't harass us that often. I feel like men are a little bit nervous about us.

It's the women that come past who are overweight and have their kids around and they're perpetuating this negative view that their children should be afraid of their own bodies. It makes me really angry because I feel like the naked human body is a beautiful thing and nobody should be afraid of it. These ghetto fat women walk past us with their children and go, "That's disgusting. Put some clothes on." I feel like saying to them, "Stop feeding your children McDonalds. Tell your girls that they have beautiful bodies and raise them as strong women to understand that their body is their body and they have control over it. They don't have to be afraid of being harassed or feeling belittled because they have a beautiful woman's body."

I'm really passionate about this, obviously. It makes me quite upset because I'm not used to this level of, I don't know, disrespect.

Today a police source tells CBS 2 that one man who allegedly manages one or more of the desnudas was arrested on an outstanding drug warrant.