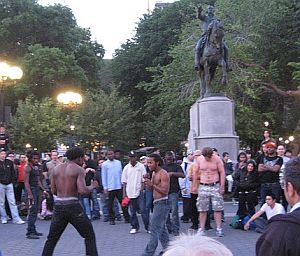 What is it about Union Square that brings out the belligerence in people? (Anyone who’s tried to get through the Greenmarket in a hurry can probably answer that.) If it’s not thugs fighting with guns and knives, it’s hipsters fighting with pillows, activists fighting to stop a restaurant, and now this: organized combat in the spirit of Fight Club. Blogger And I Am Not Lying has a breathlessly detailed account of last week’s smackdown.

After getting a text message alerting him to the fisticuffs, he arrived on the scene to find “two shirtless guys flopping around on the ground, grunting and grating one another’s faces across the cobblestones.” There’s video on his site, but none of the face grating seems to have occurred on camera – the “action” amounts to a bunch of bros taking turns slapping each other and rolling around in front of a crowd of mildly-amused bystanders.

The rules – administered by a mysterious ringleader named “Legend” – prohibit face shots and settling scores, which is too bad because it would make the videos a lot more entertaining. But despite the drama, or perhaps because of it, And I Am Not Lying is totally hooked and has been trying to contact Legend to get in with the so-called ‘Union Square Spartans’: “Like most white guys that work in the tech industry, I’ve never won a fight. Unless you count flame-wars on Digg as fights, but everyone loses those just for being there in the first place.”

#fight club
#Spartans
#union square
Do you know the scoop? Comment below or Send us a Tip
A new Gothamist is coming! We’ve moved comments over to our beta site. Click here to join the conversation and get a preview of our new website.