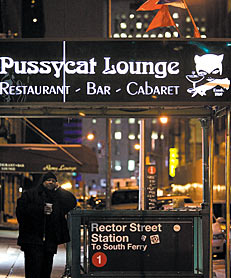 The owner of the downtown topless bar Pussycat Lounge is attempting to get the building that houses his business landmarked in order to prevent the club's destruction by an expansion-minded hotelier. The latter is Sam Chang, who currently has 20 different hotel development projects under way in Brooklyn and Manhattan. An article in The Observer reports that Chang has three hotels in the works in the neighborhood surrounding the Pussycat Lounge––a 300-room hotel on Greenwich St. next door, a 350-room hotel behind the club on Washington St., and a 186-room hotel at Trinity Place. Chang already owns the building that houses the Pussycat Lounge, after purchasing it in 2005.

Robert Kremer owns and runs the Pussycat Lounge, which is a topless bar and performance space that's been open for 34 years. His application to the Landmarks Preservation Commission has less to do with his club, than the fact that his building was originally the Augustus Hicks Lawrence House and built for a NY financier in 1799. Sam Chang wants to eventually tear the building down and use the space as a driveway for the planned adjacent hotel.

The Observer article points out that Kremer has a fairly uphill battle to fight, as there is very little documentation linking him to ownership of the building at any time. Kremer claims this was done to avoid creditors following a failed real estate development plan of his own that went under in the 1980s. Huh? We recommend reading the full article for more of the insanity.