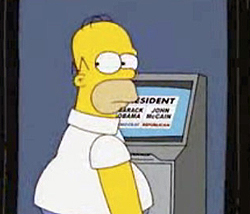 The big debut of the new optical scanning voting machines, which cost the city over $70 million dollars, was a flop of Waterworldian proportions. Because of problems with the machines, many voters were turned away in the morning, and others who did vote wondered whether the scanners really registered their votes at all. Below, the top ten reported SNAFUs from yesterday's FUBAR primary, PLUS a funny bonus video about workers at one polling site trying to find their AWOL machines.


Luckily, most of the electorate is comprised of apathetic rubes (or disenchanted independent voters!) who couldn't be bothered to participate in the democratic process; turnout was light yesterday, with an estimated 10 percent of registered voters casting ballots. It'll be fun to see how this all works during the general election! Below, a hilarious/dismaying video, via The Daily Politics, of a poll worker turning voters away because the voting machines... were missing.

#election
#election 2010
#nyc primary
#primary
#scanner voting machine
#technology
#the machines
#voting machines
Do you know the scoop? Comment below or Send us a Tip