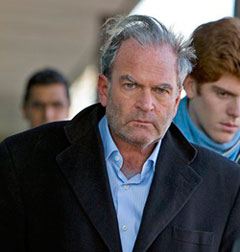 The arrest of prominent Manhattan lawyer Marc Dreier in Canada last week appears to be just the tip of the iceberg: On Sunday night, Dreier was arrested by U.S. authorities at LaGuardia airport, accused of "a $100 million fraud scheme". The NY Times says the feds "portray[ed] his recent undertakings as more high-stakes grifting than high-end lawyering."

The Times goes onto to explain that Dreier, whose clients include Jon Bon Jovi and book editor Judith Regan and whose firm boasted over 250 attorneys, ran his scam like this:

Dreier "cajoled his way into accounting, real estate and pension fund offices where he had no real business... Once there, seated in conference rooms that lent credibility to his charade, he peddled forged promissory notes — utterly worthless paper — linked in some way to his unwitting hosts...He backed up his claims with phony financial statements and bogus audit opinions from a reputable accounting firm, correspondence on the stationery of the New York real estate developer who supposedly issued the debt, and the help of a few confederates."

And with that, he managed to sell $100 million worth of fake debt to two hedge funds. His arrest in Toronto occurred after he posed as a Canadian pension lawyer when meeting with the Ontario Teachers' Pension Plan. Still at OTPP's office, he got OTPP lawyer Michael Padfield's business card...and discussed a deal with an executive from hedge fund Fortress (in OTPP's conference room), all while pretending to be Padfield.

The SEC said, "Our complaint alleges a stunning, brazen fraud that targeted some very sophisticated institutional investors," but Dreier's lawyer offered, "This is a very complicated matter, and the facts are beyond reach of a sound bite." With news of his arrest, many of his firm's lawyers quit and the firm Christmas party at the Waldorf-Astoria was cancelled. Oh, and the firm couldn't make its payroll.

#fraud
#grifting
#hedge fund
#law firm
#Marc Dreier
Do you know the scoop? Comment below or Send us a Tip