Wade Groom only worked as a clerk at Lacoste's flagship store in Midtown for three months, but he quickly became the brand's top seller—in the country. According to internal documents provided by Groom, in his biggest week he sold $39,315 worth of merchandise, $12,000 more than the next-highest clerk. But last Wednesday he was fired for posting a photo of his paycheck on his private Instagram account. "I was happy with my job, [the photo] had nothing to do with how much money I was making," Groom said.

Groom made $15/hour and 3% commission at Lacoste. "I'm not a corporate type person, I'm an artist and a musician. If you met me you'd never guess in a million years that I worked at Lacoste," Groom said. "But I'm a helluva salesman."

Still, his salary wasn't enough to support his family. "I was making as much as $1,500 a week selling shirts, but I'm not able to give my kids a better life, even if I'm working my butt off," Groom said. "I've got twins that are four years old, and I don't make enough money to save any. This what we accept in New York City." 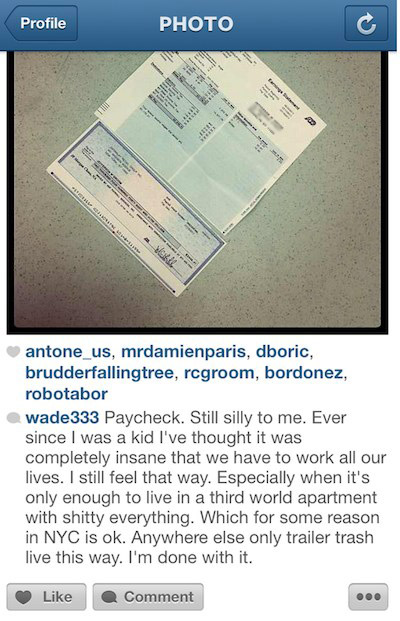 Two weeks later his manager approached him at work. "The bossman called me downstairs and told me to get on a conference call with an HR manager. The HR manager told me that the image somehow got back to the corporate office, and that it infringes our confidentiality agreement, and that I was fired."

Did he remember signing or agreeing to a confidentiality agreement? One that made references to social media?

"I just clicked 'accept terms' on that, you know?"

Several of Groom's former colleagues at Lacoste follow him on Instagram, but he doesn't know if any of them turned him in.

Groom lives in Greenpoint with his children. Groom and the mother of his two children were both featured in Time Out and the New York Post for their friendly neighborhood "play space." Groom said they sold that business, and he went to look for a job, first landing at Saks Fifth Avenue, then Lacoste.

Groom said he could recall only one instance of getting in trouble on the job. "One time they said something to be about using cuss words on the floor, but it was like, 'Hey, watch your mouth.' But I'm a character, man."

Lacoste has not returned a telephone message or an email requesting comment.

Wasn't he naive to think that he could post a photo of his paycheck from a giant corporation and think he wouldn't get in trouble? "I assumed that people would understand that I'm just expressing my frustration through my private Instagram account. Had I know it would have gotten out like this, I never would have done it.

"A stern warning would have been more appropriate."

#don't instagram your paycheck
#lacoste
#retail
#social media
#original
Do you know the scoop? Comment below or Send us a Tip