After JP Morgan Chase publicly admitted that it lost $2 billion while executing various complicated bets (and counter bets) on credit derivatives, heads are rolling. Ina Drew, the Chief Investment Officer, is resigning today because her division oversaw the London office—which handles nearly $400 billion in trades— that made what CEO Jamie Dimon called "a terrible egregious mistake." Wait, actually the press release says Drew is "retiring," but let's face it—this $2 billion mistake has the potential to be a $4 billion mistake. We're guessing her retirement party's not going to be pouring top shelf champagne.

According to the NY Times, the exit of "Drew, a 55-year-old banker who has worked at the company for three decades and serves as chief investment officer...would be a precipitous fall for a trusted lieutenant of Mr. Dimon. Last year, Ms. Drew earned roughly $14 million, making her the bank’s fourth-highest-paid officer... Ms. Drew had tearfully offered to resign multiple times since the scale of the loss became apparent in late April, but Mr. Dimon had held off until now on accepting it, said several people familiar with the situation, who would not speak publicly because the resignations had not been completed."

In addition to Drew, the Wall Street Journal reports, "Achilles Macris, who was in charge of the London-based operation that placed the questionable trades; and trader Javier Martin-Artajo" will also be leaving JP Morgan after what is, for the bank, an embarrassing episode and, for government officials who want more financial regulation, a sobering reason why banks need to be regulated. As the Times pointed out, "This much is clear: If the Glass-Steagall law were still around, the problematic trading at JPMorgan would not have occurred." So blame Clinton! 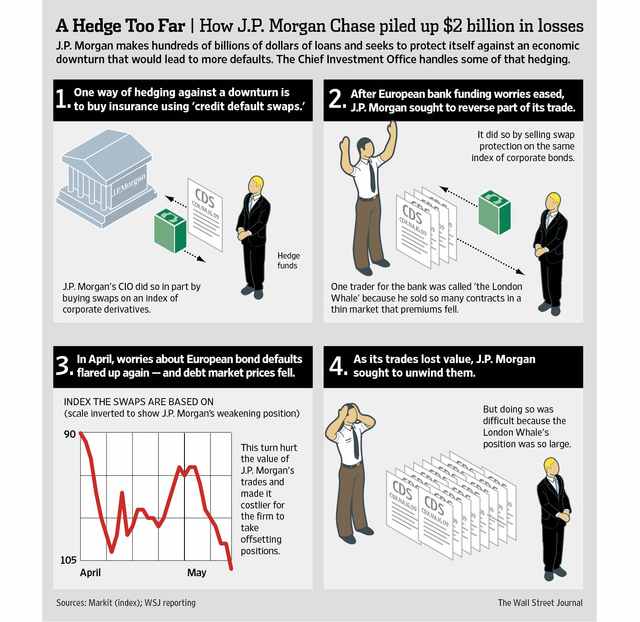 This is the WSJ's illustration of what happened, which is more sophisticated (and colorful) than the NY Times' effort