This month, we learned way too much about Tony, the Q69 bus driver who has been the subject of a very public flyer campaign against him for more than a year. According to those flyers, Tony is a "flirt with all the women every day" who had a "One Night Stand" with a passenger. Now, driver Tony Burns has spoken out about the allegations, and claims he has been harassed by passenger Gina Trapano for years now: “I just want the truth to be told so everyone knows: Tony Q69 didn’t flirt with anybody. I am not trying to get involved with any Fatal Attraction.” he told the Post. 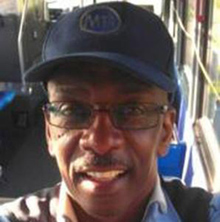 Burns, a married father of two, says it all began when Trapano—who frequently rode his line with her sister—passed him a handwritten note in April 2011: “She gave me a note telling me all about wanting to get together, [to] give her a call." He claims he put her off for awhile, but eventually she cornered him and he called her to clear everything up: “I called the lady, and I told her, I said: ‘Look, I read your letter. I appreciate your interest but I’m married and I don’t get involved with my passengers like that.’ ”

After that, Burns says she inundated him with phone calls (including 45 in one day) and voicemails such as: “Try to call me and let me know, because if you’re not answering these messages, I’m not going to know your answer, and then I have to keep calling.” Burns reported harassment to cops after a month—and by the summer, the flyers labeling him a womanizer started appearing at stops all along his route. “I’ve seen her do it a couple of times,” he said. “Unless you know who Tony Q69 is, you’d think it’s somebody who had an affair with this woman. You ever seen that movie Misery? That’s what she reminds me of.”

The MTA investigated Burns after Trapano made accusations that he "had girls riding up and down the line with [me].” Now, Burns is terrified she might escalate and attack one of his family members, especially since she started leaving him voicemails again this year. As for why he didn't change routes like one co-worker had suggested, he said it was because he didn’t do anything wrong: “We pick by seniority. Why should I leave my line? Why should I let this lady dictate what kind of money I make?”

Because it's really expensive to live here and there's limited space for tossin' the disc, here are your end-of-day links: city employees charged with pandemic loan fraud, Dave Matthews is the Gen-X Democratic voter whisperer, metal credit cards are cool (?), and more.

By
Nancy Solomon
'Police are not the answer': Civil liberty advocates on NYC's plan to involuntarily take mentally ill people to hospitals
By
Verónica Del Valle
and
Michael Hill
Early Addition: Pet sitting in a rich person's home is one way to have a cheap but fancy vacation
By
James Ramsay
NYC must pay as much as $300 million after people posted bail and weren't released
By
Matt Katz
Get the news New Yorkers need in your inbox