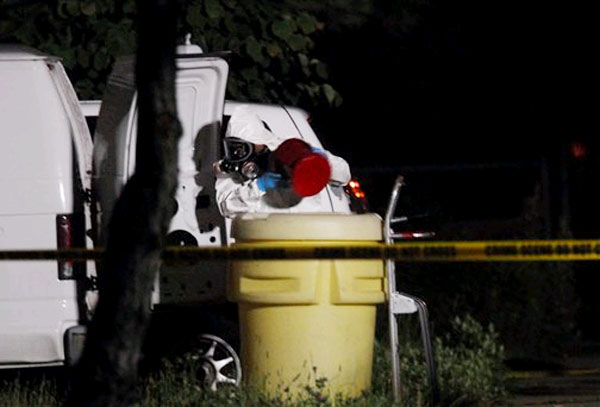 A three block section in the Graniteville was evacuated when federal authorities found 2,500 pounds of "potentially explosive" chemicals in a home and a storage facility. The initial fear was that the chemicals were being using for terrorist activities, but now it seems that Miguel Serrano had been buying chemicals in bulk to resell for a profit online. Capitalism! From the Staten Island Advance:

Potassium nitrate, sulfur, mercury and peroxide were among the 21 different types of chemicals discovered during a raid of 199 Ada Drive, police said. Quantities ranged from 5 pounds to 215 pounds, according to one law enforcement official speaking on the condition on anonymity.

...At the nearby Public Storage Facility at 1107 Goethals Road North in Mariners Harbor, cops found 2,500 pounds of potassium nitrate, a component in gunpowder. The chemical, also known as saltpeter, is commercially used as fertilizer, cleaning solvent for septic tanks and meat preservative.

Serrano was charged with reckless endangerment and may face other charges. A police source told the Advance, "He was an unlicensed chemical salesman. He has no conscience. Who knows who he was selling to on the Internet." His neighbors weren't too thrilled either - they were evacuated in the evening and only allowed back into their homes at 3AM.

At first, there were fears ammonium nitrate, which is what was used in the Oklahoma City bombings, had been found, but potassium nitrate was the main substance found. It's used to make gun powder and fireworks. A vendor had contacted the ATF after receiving a second large order from a Staten Island resedent.

Here's a slideshow from the Staten Island Advance - you can see Serrano using an oxygen mask.

Photograph of a member of NYPD's HAZMAT team removing what material believed to be potassium nitrate from a Staten Island home by Edouard H.R. Glouck/AP

#city
#crime
#gun
#internet
#law
#law enforcement
#mariners
#Mariners Harbor
#News: NYC
#nypd
#oklahoma
#Oklahoma City
#photos
#police
#staten island
#Staten Island Advance
#terrorist
Do you know the scoop? Comment below or Send us a Tip
A new Gothamist is coming! We’ve moved comments over to our beta site. Click here to join the conversation and get a preview of our new website.