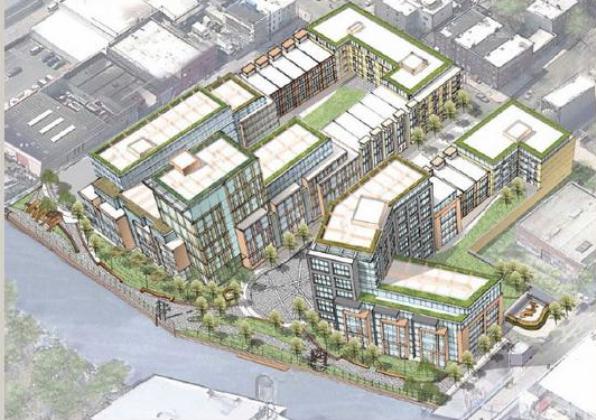 Last decade's decrepit property along a foully polluted industrial canal is just next decade's prime waterfront lots, ready for development by one the nation's premiere luxury homebuilders. The Gowanus Lounge uncovered a "scoping" document filed with the Department of City Housing by the Toll Brothers construction company. The early renderings portray a spread of mixed-use development between 2nd and Carroll Sts. and bounded by Bond St. and the Gowanus Canal itself.

The project would result in almost 600 housing units (a mix of market-rate and affordable) with an underground parking garage, as well as an esplanade along the Canal and commercial space. To avoid the inevitable catastrophic flooding that seems to be mentioned frequently, the property will be raised and all residences will be above the 100-year flood mark. Curbed has photos of what the property looks like right now.

The Toll Brothers expect the development to be completed by 2011, although that could be considered wildly optimistic. The Gowanus Whole Foods held its groundbreaking in 2006, with a completion date set for the Spring of 2008 - they just started pouring the foundation this month.