Together Again: Clinton and Obama Debate in Philly 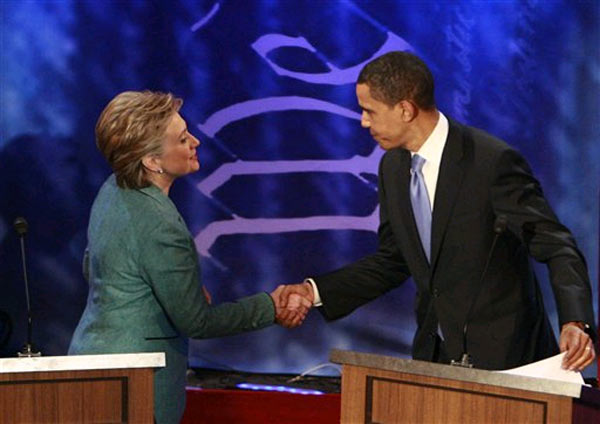 Last night, Democratic presidential hopefuls Hillary Clinton and Barack Obama met for a debate in the city of Brotherly Love. Their last debate was in February, and while this had moments of civility, it was a fight night.

Obama was on the defensive for much of the night, answering questions about his "elitist" remarks and the Reverend Jeremiah Wright. The NY Times noted how "Mrs. Clinton did not let an opportunity pass as she repeatedly challenged Mr. Obama on his record and views — assisted, as it turned out, by vigorous questioning by the two moderators from ABC News, Charles Gibson and George Stephanopolous."

One question--that MSNBC's Keith Olbermann made a point of telling viewers was essentially suggested by Sean Hannity--was one about Obama's relationship with former radical Bill Ayers, who had been in the Weather Underground. Obama and Ayers were on the board of the same charity for a time, and Obama's response was:

This is a guy who lives in my neighborhood, who's a professor of English in Chicago who I know and who I have not received some official endorsement from. He's not somebody who I exchange ideas from on a regular basis.

And the notion that somehow as a consequence of me knowing somebody who engaged in detestable acts 40 years ago, when I was 8 years old, somehow reflects on me and my values doesn't make much sense, George.

The fact is that I'm also friendly with Tom Coburn, one of the most conservative Republicans in the United States Senate, who, during his campaign, once said that it might be appropriate to apply the death penalty to those who carried out abortions.

Do I need to apologize for Mr. Coburn's statements? Because I certainly don't agree with those, either.

So this kind of game in which anybody who I know, regardless of how flimsy the relationship is, that somehow their ideas could be attributed to me, I think the American people are smarter than that. They're not going to suggest somehow that that is reflective of my views, because it obviously isn't.

Clinton then made a point of bringing up comments Ayers made on September 11, 2001 about not being sorry for planting bombs (Ayers made the comments before the WTC was hit), saying, "I'm not mistaken, that relationship with Mr. Ayers on this board continued after 9/11 and after his reported comments, which were deeply hurtful to people in New York and, I would hope, to every American, because they were published on 9/11, and he said that he was just sorry they hadn't done more." To which Obama said, "I'm going to have to respond to this just really quickly, but by Senator Clinton's own vetting standards, I don't think she would make it, since President Clinton pardoned or commuted the sentences of two members of the Weather Underground, which I think is a slightly more significant act."

The big Pennsylvania primary is next Tuesday. Here's a transcript of the debate. You can watch the whole debate here, via ABC News.

#barack obama
#election 2008
#hillary clinton
#philadelphia
Do you know the scoop? Comment below or Send us a Tip