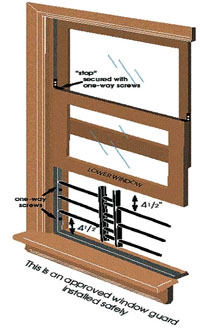 A 2-year-old boy who had crawled out of his Queens apartment through an open window and onto a fire escape fell six stories to his death yesterday morning. His mother had been taking a shower.

Neighbors tried to comfort Ezquel Contreras, who was bleeding extensively and was later pronounced dead at Elmhurst Hospital. The neighbors also said that the child's mother, Sandra Perez, didn't seem to realize her son was gone, since she didn't come downstairs for several minutes. The super, Frank Popovic, told the Daily News that Perez "had no idea what had happened. When she came down she said, 'That's not my child.'"

According to police, one of windows had a guard on it but the window leading to the fire escape did not. Perez, who also has a 1-year-old child, does not have a history of the Administration for Children's Services. Still, neighbors said they had seen the child on the fire escape before, noting an instance where the super was able to rescue Ezquel from the fire scape. Another building's super said he stopped the child from running into the street many times and a witness said, "What kind of parents are there? [Ezquel] had on only a pamper in 40-degree weather."

Eric Clapton's son Connor fell out a 53rd floor window in a NYC apartment in 1991. NYC apartment windows are required to have window guards, but guards are not allowed on fire escape windows (but those can have FDNY-approved security gates).