The current battle over the stretch of the Brooklyn-Queens Expressway that runs past Brooklyn Heights is heating up, as the Department of Transportation and community members exchange plans and counterplans for the fate of the highway — and for that of the Brooklyn Heights Promenade, which could be closed for as long as six years so that the roadway suspended beneath it can be rebuilt.

Much like with the ongoing L train fiasco, the coming BQE storm has Brooklynites asking how we got into this mess in the first place, and whether there are better ways out of it. The answer, it turns out, lies in another pitched battle that took place seven decades ago. Like today's fight, the original Brooklyn Heights throwdown had it all — city plans dropped unexpectedly on an unsuspecting populace, outraged locals proposing their own alternative designs, squabbles between advocates of public green space and those of private property rights. And the result was a structure-by-committee that has left today's Brooklynites preparing to relive the traumas of their borough's past.

Up until the 1940s, the Brooklyn Heights bluffs that overlooked the East River showed a very different face from that of today. A series of mansions erected in the 19th century, plus some luxury apartment buildings added in the decades that followed, topped a steep, undeveloped slope that dropped off to a series of warehouses lining the river along Furman Street. There was no highway then, and no promenade either; the top of the bluff was, in a very real sense, the backyard of the wealthy families who occupied Brooklyn's most valuable real estate along Columbia Heights, the street that ran along the crest of the ridge.

That world came under threat in 1942, when Robert Moses, the Triborough Bridge and Tunnel Authority chair (among many other public titles he held concurrently) who was rapidly bulldozing large swaths of the city to plow through new highways, announced his plan to build a stretch of his new Brooklyn-Queens Expressway through Brooklyn Heights. Under Moses's original plan, the BQE would cut through the neighborhood, much as it does today on Hicks Street in Cobble Hill and Carroll Gardens. As the Brooklyn Eagle wrote in an alarmed editorial (headline: "Plan for Express Highway Through Heights Is Shocking"):

Only a brief study of the map is needed to show the destruction that would be wrought by driving such an express highway through the heart of one of the finest sections of the borough which has largely withstood the changes of recent years.

In addition to many fine apartment houses that would be affected, the general route under consideration would cut across Monroe Place and Pierrepont Street in a way that would probably involve the demolition of at least part of the brand-new Appellate Division Court House, one of the most imposing public buildings in the borough. This doesn't make sense. 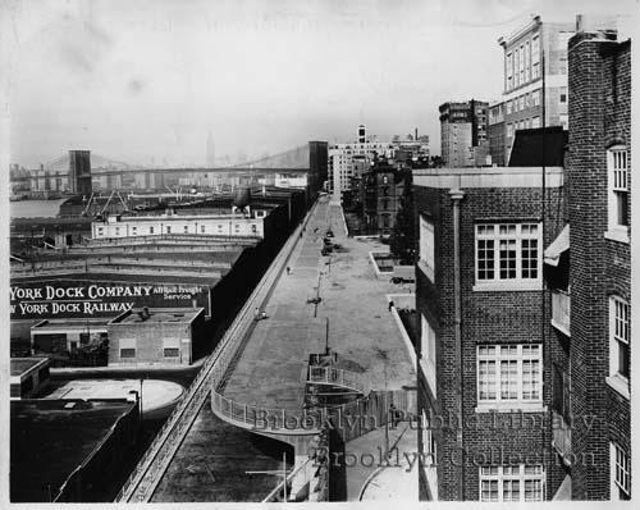 The Brooklyn Heights Association, a then three-decade-old organization led by well-off neighborhood residents, immediately appealed to Moses to pursue an alternate plan: a two-level highway running along the bluff above Furman Street, thus sparing their houses. Whether because of the influence of the lawyers and corporate titans on the BHA, or the fact that condemning valuable Brooklyn Heights land would be too expensive, the city's highway builder soon acquiesced.

Even then, though, Moses's proposal was for a six-lane road at the current promenade level, running directly through many of the rich folks' backyards. Fred Nitardy, a Columbia Heights resident and engineering vice president for Squibb Pharmaceuticals (then housed in what would later become The Watchtower building), countered with a plan for two separate decks, topped by a "cover" that would leave room to preserve homeowners' gardens. At a March 1943 public hearing, he even offered that if Moses offered a tiered approach, "I will give the City free rights to this property so that the Highway is there."

Four weeks later, Brooklyn Borough President John Cashmore wrote to Nitardy with good news and bad news: the triple-decker structure was on, but the top level would not bet private backyards, but a public "esplanade" that would be "similar in many respect, but I hope more attractive, than that portion of the east side drive which is in the neighborhood of Carl Schurz Park."

The immediate response of locals, during the decade-long construction that followed, was not entirely positive. There were the expected complaints about years of construction debris and the noise of pile drivers pounding into the slope. (Pile driving had to be abandoned south of Montague Street after the vibrations opened a crack in the foundation of a nearby apartment building.) And even before the promenade had officially opened to the public, Eagle columnist Margaret Mara—writing on the paper's "What Women Are Doing" page—bemoaned how fence-cutters had already made it "a nightmare to people living in those [Columbia Heights] houses: promenaders peering into windows of homes, and hoodlums shouting in unseemly language." 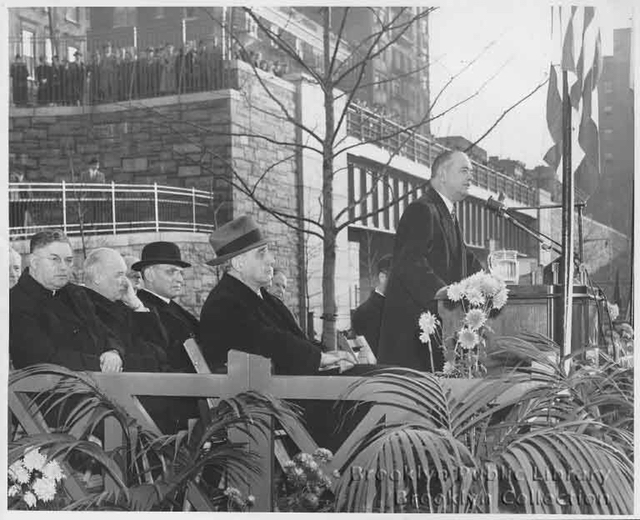 But once the southern half of the promenade opened on October 7th, 1950—the northern section debuted a little over a year later—local sentiments began to warm. When the BQE finally opened for traffic in 1954, after delays partially prompted by a two-month nationwide steelworkers' strike, the promenade provided a welcome buffer for Columbia Heights residents, even if it came with the added bother of the general public enjoying what had once been their private views. And thanks to the revised highway route, the appellate court house had survived, though some of the "fine apartment houses" weren't so lucky: The Riverside Houses lost a section to the highway and its Atlantic Avenue on-ramp, and other buildings were demolished as well.

Still, the BHA and preservationists eventually came to cherish the promenade. In 1974, the city even enacted a spot zoning of the Brooklyn waterfront to guarantee an unobstructed "view plane" from the edge of the promenade to the middle of the East River — which became an issue in 2015 when BHA sued over the new Pier 1 hotel and apartments along the waterfront, charging that it violated the protected views. (They lost.)

The entire process, remarked Henrik Krogius in his definitive book The Brooklyn Heights Promenade, was remarkable in that "the design for this urban marvel was arrived at in deep obscurity, its plans evolving in the midst of World War II when almost all attention was focused elsewhere, and long before the current requirement of New York and many other cities that important projects go through prescribed stages of public scrutiny."

Those prescribed stages of public scrutiny are where we are now, as the Department of Transportation tries to determine how best to repair Moses's three-deck structure, which it projects will become too fragile for truck traffic by 2026. The plan now is to build a temporary variation on what Moses proposed in 1943: a double-decked six-lane highway on the current site of the BQE and promenade, which would eventually be removed and replaced with a new structure replicating the old one. (BHA, still alive and kicking all these years, has called this a temporary six-lane highway at the promenade level, but DOT's renderings appear to show that only three lanes of the top level would be in use at any given time.)

BHA has countered with plans for a highway built partly over the earthen berm that fronts Brooklyn Bridge Park. BHA officials say that their plan would at least potentially shorten the time the promenade was out of commission, as well as putting the noise of the temporary highway 100 feet farther from Heights residents' windows, albeit somewhat closer to the park. 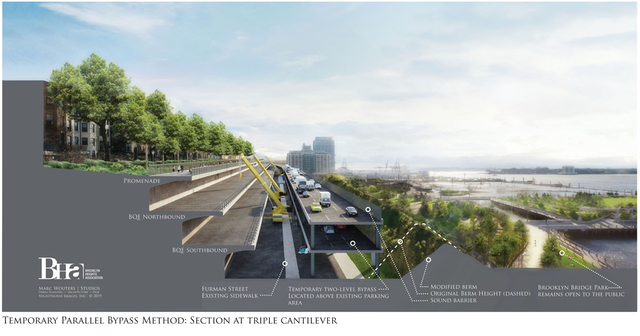 DOT officials have said they'll consider any and all proposals, though they've noted that the promenade would have to be demolished and rebuilt in any case, since it and the BQE are all one structure. And either way, any ad-hoc highway would likely involve a temporary roadway perched atop the Brooklyn Bridge on-ramp.

"The promenade under any scenario has to be rebuilt, that is true," BHA executive director Peter Bray told Gothamist. "We think that under our alternative that the promenade could remain in use for a longer period of time because you wouldn't have the six-lane structure sitting on top of it."

While Bray can't put a timeline on how short a promenade rebuild would take under the BHA plan, he does express skepticism about the city's predictions for its plan: "We all feel that six years is wildly optimistic, that we could easily be talking about that highway being in place for 10 to 15 years, and the promenade being no longer accessible for that period of time."

As for how long the new structure would be expected to last this time around before needing yet another teardown and rebuild, we asked DOT officials, but did not hear back by publication time. So even as Brooklyn Heights residents prepare themselves for years of turmoil — regardless of which reconstruction plan is chosen, it's going to be a construction nightmare as the bluff is stripped down to its roots and rebuilt — they might want to set their clocks again for 2095, just in case.